Damn It, Just Stop Killing Us! 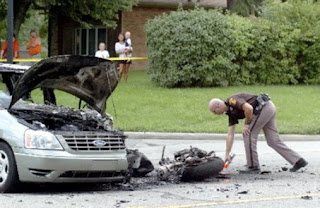 This is to all you drivers out there who aren't motorcyclists. Please stop killing us making left-hand turns across traffic.

Seriously, that's about the most common cause of motorcycle deaths from crashes.

Here's the typical scenario. The car/truck/SUV jockey is waiting impatiently for a break in the oncoming traffic in order to make a left turn onto a side street. At long last he spies a break in the long line of traffic ahead. Just enough room if he guns it to finally get on his way.

Now he goes through a process of focusing on the car at the beginning of the gap, timing his move on that approaching vehicle. His eyes are on that vehicle. His attention is on that vehicle. When it gets close enough he makes his move, hit the gas and turn the wheel to the left.
Sound familiar? You've probably been in that very situation yourself. That you haven't already wiped out a motorcycle may be nothing more than luck.
You may not even see the motorcycle behind the car/truck/SUV you were keyed on or at least you may not see it before you smash into it. Even if you do spot it, you've already got your foot on the gas and it may be impossible to stop in time.

You see, the problem is you don't actually know what might be in that gap you want to exploit. All you see are the vehicle at the front of the gap and the one following. It's a very shallow angle that limits your view of the gap itself to little or nothing. You just assume that it's empty space waiting for you and you alone to slide through.

This little rant was inspired by a report out of Calgary today. A woman passenger on a bike was killed by - you guessed it - a left-turning SUV. CTV reports that police are trying to determine whether the SUV driver saw the motorcycle before hitting it.

Here's a little home truth. Car drivers roam the streets with tunnel vision. They see what they're looking for, what the're expecting to see - other cars, trucks and SUVs. They're not looking for motorcycles and often don't spot them until they're very close. Holiday motorists are even worse. Ask your local deer population. City visitors aren't used to deer on their streets and aren't expecting to see them on ours. We know summer has arrived when we start seeing the deer carcasses on the side of the highway.

Now I'm not laying all the blame on you car drivers. I have a 10-year old little gas miser that I use when I must and I know how infuriating some bikers can be. Some are reckless, others are just plain incompetent. Motorcycling is inherently somewhat risky and these jokers compound their odds of running out of road.

If you're a motorcyclist, please, please use your head. Don't tailgate. That just makes you disappear to oncoming traffic. Leave plenty of space and get out by the dividing line where you can be seen by oncoming traffic and especially that guy impatient to make that left hand turn. The one who sees you isn't the one who's going to kill you.

Summer is here and with it the lure of two-wheeling along the mountain and coastal twisties of this awesome island.

And you, the one with that SUV. Don't think I haven't spotted you. I've encountered you in every major city I've ridden through and you stand out like the proverbial sore thumb: ridiculously cute, hair and makeup done up just right, sporting a tennis visor, driving the biggest damned SUV in our half of the Galaxy and chattering away on that damned cell phone. Damn it, stop trying to kill me! Enough already.
Posted by The Mound of Sound at 8:55 PM