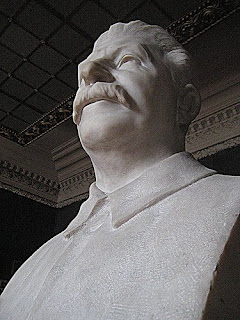 "...Hidden in the lush forest above the coast at Gagra in Abkhazia is a lime-green mansion; one of several dachas built for Joseph Stalin, an ethnic Georgian, along the Abkhaz coastline. He'd come for weeks in the summer, relaxing on the balcony or playing a game of pool with other leading Bolsheviks. It may have been here that Stalin made many of the decisions that scattered and divided nations, and led to many of the conflicts that have flared up since the Soviet Union collapsed. National and ethnic identities were shifted, encouraged or suppressed during different periods. Whole nations were deported to Siberia or the Kazakh steppe, scattered irrevocably like human dust. Borders between the different entities of the union were changed at will, often with the express intention of fomenting ethnic unrest.
In Abkhazia itself, huge numbers of Georgian settlers were moved in; the Abkhaz language was suppressed and the Georgian language was enforced in schools and universities. In fact, many ethnic Abkhaz talk about the Georgian rule over their territory in the same terms that the Georgians themselves talk about Soviet oppression.

While Vladimir Putin and the Kremlin undoubtedly ruthlessly exploit the tensions in South Ossetia and Abkhazia, it is a foolish mistake to think they created them. Ossetians and Abkhaz remember all too well the aggressive and unpleasant Georgian nationalism during the early 1990s, and have no desire to be part of a Georgian state. Meanwhile, after the wars in both regions at that time, many ethnic Georgians still live as refugees in grim conditions in Tbilisi and other Georgian cities.

The Abkhaz say that all the West's posturing over "territorial integrity" is meaningless – why on earth should arbitrary lines drawn up by Stalin be the basis for statehood in the 21st century? Now that Saakashvili has been humiliated over the South Ossetian conflict, the Abkhaz are more buoyant than ever, and it's hard to see the territory ever becoming part of Georgia again. The threat of conflict will always loom, though, and when the Georgians rebuild their army and country, we can expect to see renewed conflict."
Now, it seems, Canada and the US have announced they're "withdrawing" from a planned NORAD exercise with the Russians. Wait a second, it's a NORAD exercise. WE are NORAD. Isn't this a bit like refusing to attend your own, backyard birthday party?
Stephen Harper, never one to let facts get in his way, told reporters, ""In my judgment, this is a very worrisome development. It really indicates a Soviet-era mentality. "
The Ossetian and Abkhaz people have endured a century of intermittent fighting with neighbouring Georgia. Read the history and then ask yourself if we're really backing the Good Guys in this one or maybe just honouring the legacy of Joseph Stalin.
Posted by The Mound of Sound at 9:14 AM