Points of No Return 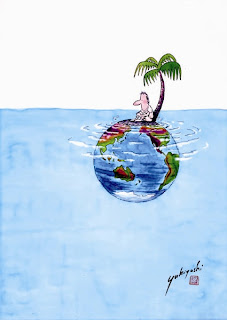 Polls show that the great majority of Canadians today get the idea of global warming.

Those that do, want something done about it even if they can't really grasp what that something is.

What's the "human tipping point?" Consider it the point at which enough consensus exists to make effective global warming solutions not only possible but imperative. The point at which a sufficient majority of our species demands action that they cannot be ignored by our leaders or overwhelmed in nonsense by the denialists.

We'll likely reach that human tipping point when enough of us understand that we can change our world and that if we don't change, our world will change us all on its own.

If we don't reach our tipping point before the earth reaches one or more of its climatic tipping points we may find ourselves playing catch up ball for the survival of our species.

It has gradually become apparent that meeting this challenge may be in the hands of mankind, not our governments. I'm not sure there are enough governments capable of acknowledging and taking independent action if only to persuade and cajole holdouts into coming on side. Some nations have to start this and, so far, it's been a pretty piecemeal, muddled effort. That's in part because there are inevitable economic side effects of action. There are downsides. The trade off is limited downsides voluntarily sustained now or far greater downsides involuntarily sustained later.

Governments gave up posterity as a quaint and obsolete notion a long time ago and, in doing that, they deprived us of the mindset we require to tackle global warming. You see, respecting posterity entails leadership. It means persuading the electorate to do without something for the benefit of their country in the future. Our leaders aren't much into that any longer. They choose not to lead but to follow. Leadership has given way to manipulation. Appealing to fears, prejudices and greed is much easier, faster and more effective. It requires little by way of integrity, courage or vision. And yes, we've been conditioned to accept just that.

Many ask why do these things now when the really bad effects won't be felt during our lifetimes? It makes some perverse sense. Why do without for someone else? The answer is because what lies in store for that "someone else" will be the consequences of our actions. We've already set in motion processes what will afflict future generations. What gives us the right to continue that, to make life that much worse for them? What gives us the right to enjoy luxuries today that will cost the lives of women and children in less fortunate places?

Do you have that right? Do you think that's right? Don't go sidestepping for the exits, arguing that the science isn't in or that there's nothing we can do about it anyway. You're already doing something about it and what you're doing is already being felt around the world and will create even more suffering in decades and centuries to come if it's not stopped. What we've done in two or three generations is going to be paid for in scores, possibly hundreds of generations to come.

Change is coming and it's inevitable. Look at it like a tsunami. You're sitting at your beachside resort when the warning comes in of a possible earthquake-generated tsunami. So, do you remain in your deck chair savouring that Corona moment or do you pack up and head for high ground? You're just a layman. You don't know for certain that a tsunami is on the way. The experts don't know positively either but they believe there's a very real risk of a killer wave and we don't second guess them, we react.

The devastation that will be created by unchecked anthropogenic global warming will make the worst tsunami look insignificant in contrast. On every point of the planet, every square metre, our lives will change. There'll be no spot unaffected, nothing. A few places will actually improve in some ways but the number of them will be dwarfed by the lands and regions rendered uninhabitable. And once you render vast areas uninhabitable it brings change, often unwelcome consequences, to every other place.

There won't be any new Edens created by global warming. That's just silly. Adam and Eve had Eden all to themselves. There might have been the odd, troublesome snake but there was no horde at the garden's gate pushing its way in.

Taking effective action to fight global warming on both fronts - remediation and adaptation - doesn't mean reducing ourselves to penury. That's the fear you've been conditioned to respond to talking.

Think about this. As you read this, and I mean this very instant, the sacrifice required to fight global warming is as minimal as it's every going to get. Right now. Next month, next year, a decade from now that sacrifice is going to be much greater and, here's the thing, the longer you wait the less choice you're going to have on dealing with the problem. Time is not on your side, it's not on our side. The problem is steadily getting bigger and nastier while our options are just as steadily getting smaller and nastier.

Global warming. It's a problem that's all in your mind.
Posted by The Mound of Sound at 7:55 AM

Global warming is the scam of the century. Too bad they got you!

JB... The internal combustion engine is the "crime of the century". Nice to know they "got you".

I have a strong background in sciences. I've measured - in the field - effects of climate change on farm and urban soils and water in Sask. as far back as the 90s. I've studied the changes in species and biomes. I've kept an open mind and learned about the changes that are occurring. Yeah, I wish the "deniers" were right, but all my education (to the graduate level), and my common sense tells me otherwise.

Yes, there are cyclical patterns of warming and change, but NEVER, EVER, has a species been able to change the face of planet. When you have a dam being built in China which will actually increase pressure on the earth's crust because of the size of it's reservoir, then we know we've gone too far. The fossil fuels we have released into the atmosphere have compounded the melting of the ice caps. The reduction in weight over the Arctic and Antarctic land masses means subtle shifts in the pressures on the tectonic plates worldwide. This results in more earthquakes, which results in more tsunamis, and more extreme ocean storms... When you couple this with the temperature changes that come with that, you see the extreme (and they're not the worst they can be, yet) storms.

As far as the "they" getting us... Hmmm... who would benefit from their side of the story the most? Scientist living hand-to-mouth, dedicating their lives to education and research, or Big Oil Barons? Who has the money to create a world-wide lobby to convince people, and make it seem like "the other end of the scale" compared to what the research scientists are saying? Big Oil, that's who.

Who's "getting" who, my friend? Your distorted sense of reality buys too much, lock-stock-and-barrel into the right wing mythologies. Unfortunately, there are too many of you wanna-be-macho cerebral children in North America... People who had the chance to keep their eyes open... be balanced... choose neither right, nor left... But you're hopelessly espoused to the strategy of one "wing". Scary. Really is.

Thanks for weighing in, WG. Much appreciated. And Jim Bobby, you don't have to tell me that this JB isn't you. That couldn't be more obvious.