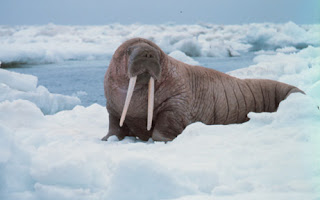 We're getting accustomed to brief intervals where the Arctic Ocean is open for navigation, but the North Pole itself? Until recently those pesky, alarmist scientists were warning that the North Pole could be ice free in as little as 60-years. Now they're predicting that may be just five years off.

What really unsettles scientists, however, is their inability to forecast precisely what is happening in the Arctic, the part of the world most vulnerable to the effects of global warming. 'When we did the first climate change computer models, we thought the Arctic's summer ice cover would last until around 2070,' said Professor Peter Wadhams of Cambridge University. 'It is now clear we did not understand how thin the ice cap had already become - for Arctic ice cover has since been disappearing at ever increasing rates. Every few years we have to revise our estimates downwards. Now the most detailed computer models suggest the Arctic's summer ice is going to last for only a few more years - and given what we have seen happen last week, I think they are probably correct.'

The most important of these computer studies of ice cover was carried out a few months ago by Professor Wieslaw Maslowski of the Naval Postgraduate School in Monterey, California. Using US navy supercomputers, his team produced a forecast which indicated that by 2013 there will be no ice in the Arctic - other than a few outcrops on islands near Greenland and Canada - between mid-July and mid-September.

'It does not really matter whether 2007 or 2008 is the worst year on record for Arctic ice,' Maslowski said. 'The crucial point is that ice is clearly not building up enough over winter to restore cover and that when you combine current estimates of ice thickness with the extent of the ice cap, you get a very clear indication that the Arctic is going to be ice-free in summer in five years. And when that happens, there will be consequences.'

This point was backed by Mark Serreze [of the US National Snow and Ice Data Centre in Boulder, Colorado]. 'The trouble is that sea ice is now disappearing from the Arctic faster than our ability to develop new computer models and to understand what is happening there. We always knew it would be the first region on Earth to feel the impact of climate change, but not at anything like this speed. What is happening now indicates that global warming is occurring far earlier than any of us expected."
Posted by The Mound of Sound at 8:08 AM

And now for the rest of the storey . . . .
Meanwhile, it is barely reported outside Alaska that America’s northernmost state is having a record cool summer.
If it reaches 19C in Anchorage today, it will be just the eighth time that’s happened this summer. Indeed, this could be the first summer ever that Anchorage never hits 24C.
Nor may you have heard about conclusions by University of Guelph environmental biologist Jonathan Newman and his graduate student Anna Mika. Last week, Prof. Newman and Ms. Mika warned other researchers to use results from the UN’s 31 climate computers with great caution.
If you are using these computer models (the data sources on which all of the UN’s climate doom and gloom rests) to determine what will happen to human or animal populations for the next century, or to forecast the spread of disease or pests and so on, the answer you get will vary according to which computer you use.
“These models are the basis on which all research in climate change is done,” Prof. Newman said in a press release. Yet despite using two computers — one Canadian, one British — that both predicted the same future climate, “we basically got opposite answers” about the potential impact on insect spread “when we should have gotten the same answer.”
No predictions of future climate-related catastrophes are reliable enough for use in making public policy “unless they are run through many models,” according to Prof. Newton, and then only if most of the models are in rough agreement.
Or how about the discovery last month by NASA that at least 70% of global warming to date is due to the Pacific Decadal Oscillation, the pattern of ocean currents and cloud formation connected with the El Nino and La Nina phenomena?
And what of the study, released in July by Switzerland’s Institute for Atmospheric and Climate Science, that shows European temperatures, at least, have risen in large part because of efforts over the past 30 years to clean the continent’s skies?
Christian Ruckstuhl and 12 co-authors found that of the 1C rise in temperature in Europe over the last three decades, “at least half of the warming” is attributable to a reduction of aerosols, such as sulphur dioxide and black soot particles. As Europeans have cleaned up their smokestacks and tailpipes, and as dirty old Soviet-era East European plants have been modernized to Western standards, more sunlight has penetrated the continent’s atmosphere and warmed things up a bit.
In other words, environmentalism is causing global warming. As eco-advocates have won tighter clean-air regulations, their efforts have been rewarded with brighter days (a good thing), but also warmer temperatures.
The GW crowd continues to use selective data to push their globalist agenda . . . 30 years of records in the Arctic is a mere blip in the big picture . . . there is more ice today than there was last year.

Geez Preschool, we don't need scientists and all this expensive monitoring equipment. All we need is you and the crap you cut and paste. And you accuse anyone of using "selective data to push" their agenda? You're a clown, a real clown.