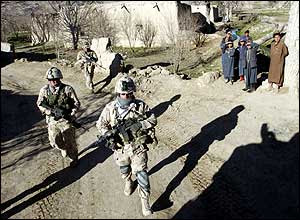 One of the dead, Sergeant Shawn Eades, was on his third tour of Afghanistan.

Umm... no. They were mounted (in vehicle), heading to an area to do road clearance. The IED was apparently a stack of mines exploded from a culvert on the side of the road.

I got that clarification, Dave. Initial reports tend to be confused. Not sure that it matters a damn though, what do you think?

No, it doesn't matter in the end, although the mine used indicates that there is an even greater threat.

A friend of mine, recently returned from Afghanistan, commented that the biggest single killer of Canadian troops is a policy of using the roads.

How many time do you have to stick your hand on a hot stove before you quit doing it?

But Dave, if you don't patrol the ring road that's Afghanistan's lifeblood, it defaults to insurgent control. If they can make that road impassable they have cut off Kabul - which some claim is precisely what they're doing.

We're supposedly going to be renting helicopters but they're a poor substitute for patrolling and will leave our meagre, garrison force even more isolated.

This, sadly, is a lose-lose situation for the US and ISAF - far too few troops in country for far too many years already.

Maybe we should just keep our people in garrisons and fire bases. Oh yeah, that's been tried before - a couple of times - and it played right into the guerrillas strengths every time.

As Petraeus himself wrote - Go Big or Go Home.