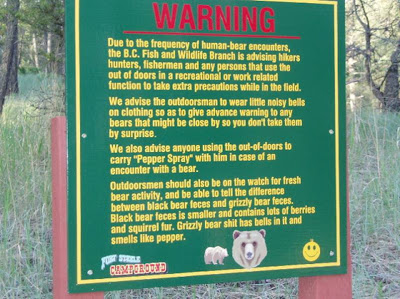 It's true though. A woman was mauled in Coquitlam and bear sightings are at a high. I know I've changed my plans based on the possibility of bears being on some forest hikes.

It's not the bears that trouble me although I've had two close calls with black bears while motorcycling on the island. Fortunately the Grizzly never got over here from the mainland. What we do have, however, is the world's highest density of cougars. Fortunately we don't tend to see them although it's pretty well known that they see us instead. I like the government's advice on a cougar confrontation. Make yourself appear as big as possible. Shout at the top of your lungs. If the cat doesn't back off, look for a big stick and prepare to defend yourself. Something unsettling about that "you're in the fight of your life" warning is just a tad creepy.