McCain Isn't Just More of the Same. He's So Much More. 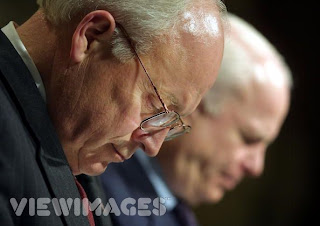 John McCain knows the Iraq War is extremely unpopular with the American people. That's why he deftly changes the subject, saying there's no undoing the past and, like it or not, it's essential that America emerge victorious.

What the Old Cold Warrior doesn't want to discuss is his own Uber-hawkishness in the wake of 9/11. The New York Times takes a look at just that today and it sheds an important, perhaps even critical, light on John McCain's fitness to command the world's most powerful and, in the wrong hands, most dangerous military in the world:

"...Within hours [of the 9/11 attacks], Mr. McCain, the Vietnam War hero and famed straight talker of the 2000 Republican primary, had taken on a new role: the leading advocate of taking the American retaliation against Al Qaeda far beyond Afghanistan. In a marathon of television and radio appearances, Mr. McCain recited a short list of other countries said to support terrorism, invariably including Iraq, Iran and Syria.

“There is a system out there or network, and that network is going to have to be attacked,” Mr. McCain said the next morning on ABC News. “It isn’t just Afghanistan,” he added, on MSNBC. “I don’t think if you got bin Laden tomorrow that the threat has disappeared,” he said on CBS, pointing toward other countries in the Middle East.

Within a month he made clear his priority. “Very obviously Iraq is the first country,” he declared on CNN. By Jan. 2, Mr. McCain was on the aircraft carrier Theodore Roosevelt in the Arabian Sea, yelling to a crowd of sailors and airmen: “Next up, Baghdad!”

...To his admirers, Mr. McCain’s tough response to Sept. 11 is at the heart of his appeal. They argue that he displayed the same decisiveness again last week in his swift calls to penalize Russia for its incursion into Georgia, in part by sending peacekeepers to police its border.

His critics charge that the emotion of Sept. 11 overwhelmed his former cool-eyed caution about deploying American troops without a clear national interest and a well-defined exit, turning him into a tool of the Bush administration in its push for a war to transform the region.

...While pushing to take on Saddam Hussein, Mr. McCain also made arguments and statements that he may no longer wish to recall. He lauded the war planners he would later criticize, including Defense Secretary Donald Rumsfeld and Vice President Dick Cheney. (Mr. McCain even volunteered that he would have given the same job to Mr. Cheney.) He urged support for the later-discredited Iraqi exile Ahmad Chalabi's opposition group, the Iraqi National Congress, and echoed some of its suspect accusations in the national media. And he advanced misleading assertions not only about Mr. Hussein’s supposed weapons programs but also about his possible ties to international terrorists, Al Qaeda and the Sept. 11 attacks.

...The Sept. 11 attacks “demonstrated the grave threat posed by a hostile regime, possessing weapons of mass destruction, and with reported ties to terrorists,” Mr. McCain wrote in an e-mail message on Friday. Given Mr. Hussein’s history of pursuing illegal weapons and his avowed hostility to the United States, “his regime posed a threat we had to take seriously.” The attacks were still a reminder, Mr. McCain added, of the importance of international action “to prevent outlaw states — like Iran today — from developing weapons of mass destruction.”

...Soon Mr. McCain and his aides were consulting regularly with the circle of hawkish foreign policy thinkers sometimes referred to as neoconservatives — including Mr. Kristol, Robert Kagan and Randy Scheunemann, a former aide to Mr. Dole who became a McCain campaign adviser — to develop the senator’s foreign policy ideas and instincts into the broad themes of a presidential campaign. (In his e-mail message, Mr. McCain noted that he had also consulted with friends like Henry Kissinger, known for a narrower view of American interests.)

One result was a series of speeches in which Mr. McCain called for “rogue state rollback.” He argued that disparate regional troublemakers, including Iraq, North Korea and Serbia, bore a common stamp: they were all autocracies. And as such, he contended, they were more likely to export terrorism, spread dangerous weapons, or start ethnic conflicts. In an early outline of what would become his initial response to the Sept. 11 attacks, Mr. McCain argued that “swift and sure” retribution against any one of the rogue states was an essential deterrent to any of the others.

...Although he had campaigned for President Bush during the 2000 general election, he was still largely frozen out of the White House because of animosities left over from the Republican primary. But after Mr. Bush declared he would hold responsible any country condoning terrorism, Mr. McCain called his leadership “magnificent” and his national security team the strongest “that has ever been assembled.” A few weeks later, Larry King of CNN asked whether he would have named Mr. Rumsfeld and Colin Powell to a McCain cabinet. “Oh, yes, and Cheney,” Mr. McCain answered, saying he, too, would have offered Mr. Cheney the vice presidency.

...At a European security conference in February 2002, when the Bush administration still publicly maintained that it had made no decision about moving against Iraq, Mr. McCain described an invasion as all but certain. “A terrorist resides in Baghdad,” he said, adding, “A day of reckoning is approaching.”

Regime change in Iraq in addition to Afghanistan, he argued, would compel other sponsors of terrorism to mend their ways, “accomplishing by example what we would otherwise have to pursue through force of arms.”

It may be no coincidence that the neo-cons have gone to ground in this campaign. Even their imperialist/dominate the world website, http://www.newamericancentury.org/, has been shut down, apparently for non-payment. They must, however, be beside themselves in anticipation of an even more neo-conservative regime replacing BuCheney. And what a candidate. All the impulsiveness of George w. Bush and all the murderous bloodthirst of Dick Cheney rolled into one.
Posted by The Mound of Sound at 8:07 AM

Doubling up on a bad bet is as poor an idea in politics as in a casino. However, to paraphase H.L. Mencken: "No-one ever lost an election underestimating the intelligence of the American public." In fairness, it is not a lack of intelligence, but an unwillingness to use it that is the problem.