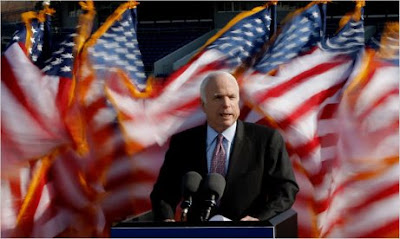 If John McCain becomes the next US president, he promises to show Russia some tough love.

McCain has long championed booting Russia out of the G8 and he might even get his way before the G8's relevance turns really wobbly. Now he wants NATO to get Georgia into the alliance ASAP.

Georgia? Some key NATO members have their doubts on that one. After all, had they allowed themselves to be steamrollered by Washington's earlier demands on Georgia, they might be facing an Article 5 call to take up arms against Russia right now triggered by some guy named Saakashvili. How long do you think the alliance would last in that situation? A week? Two?

Some critics say John McCain wants to refight the Vietnam War to redeem America's honour. It seems he might want to revisit the Cold War also, maybe even turn it from cold to hot.

He overstates his own nation's powers and underestimates his opponent's. He sees America and Russia in a simplistic, two-dimensional way. Old John doesn't seem to understand that, among the nations of the world who wish harm on the USA, Russia is well down the list.

America's chief rival in the coming decades will be China. What possible good can come to the United States by goading Russia into embracing China even more closely? This is not the time for empty American sabre-rattling. It doesn't work with a guy like Putin and it can even scare off your friends.

By the way, if a McCain White House did decide to reinstate the Cold War, who would fund that enormously expensive venture? Given that American can only do these things on borrowed money, would that come from the Chinese or the Europeans?
Posted by The Mound of Sound at 8:30 AM

I agree with you, but the alternative is to go back to the appesement of the carter years, I still beleive that mccain is just lookin for votes, and would slow it down if elected, the other side would make things worse...as for georgia, no matter what the media is trying to tell us what to beleive, georgia stated all this, but with whos permission I wonder....they did kill russian peacekeepers in there sleep, and bombed a civilian population, the same way, milosovic did with kosovo, bosnia, so on....russia has no intention of occupying georgia in my opinion...geogias president will have to answer to his people at the polls, either way he is out, so why occupy?

I can't see that aggression or appeasement will do any good. This is a situation that calls for a lot of effective diplomacy. There is no reason why NATO and Russia shouldn't have a buffer-state belt between them with a clear agreement on demilitarization in the buffer zone and security for the buffer states. NATO membership can't become a vehicle for old Warsaw Pact countries to somehow settle scores with the Kremlin.

Don't forget about the Western European Union, Mound. We are supposedly moving towards a European Security and Defence Identity. How this works without American leading is questionable at best. Note also that Canada still punches below its weight on NATO and OSCE institutions.