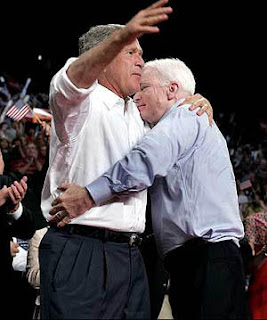 The crisis over South Ossetia is no laughing matter. It's believed that thousands have died in South Ossetia, Abkhazia and Georgia at the hands of the Georgian and Russian armies.

There is some wry humour, however, in the way the right-wing pundits have been flailing about, spinning furiously, before landing in a spent heap. They're incensed at Vlad Putin and damn well want something done about it but, when it comes to that certain "something," they keep coming up empty.

I'm sure the White House wishes it had some leverage over Moscow but it doesn't. American influence is at an all-time low. It's skint. It's worse even than the aftermath of Vietnam.

That may just be the real Bush legacy, the idea that global power is a weapon that works best when it's unused and that, above all else, even a mighty nation needs to pick its fights carefully.

WWJMD? Yes, indeed, What Would John McCain Do in this situation? Judging by his addled rhetoric of recent months, Johnny boy would probably find some means of unilateral action, some way to give Putin one upside along the head. Oh he'd sure as hell demand that Russia be kicked out of the G8 and he might even get his way. He'd certainly keep Russia out of the WTO. He might even try to reinstate the Cold War.

In other words, John McCain might damage America more than he could ever damage Russia. Why? McCain's gunslinger views aren't shared outside America (of course there's always Harper). The Euros aren't interested in playing McCain's game. They need Russian energy and, almost as importantly, access to Russian markets. So, if McCain can't swing Europe, maybe he could get the Asians to bite? Sorry, no. NATO? Not a chance (see Europe ante). Maybe a "coalition of the broke and needy" might rope in a few eastern European states but, no, they're all too familiar with the Bear on their doorstep.

Put simply, John McCain might just be the guy to isolate his own country in a weird sort of rebound containment. And an isolated America might find it a lot tougher dealing with its international creditors, particularly China.

George w. Bush has done a pretty effective job of hammering America on the anvil of his delusions. Maybe McCain will finish the job.
Posted by The Mound of Sound at 8:32 AM

And what will your Euro friends do now that they are attached to the Russian pipelines. The crazed little KGB despot is only beginning to force the will of mother Russia on the continent. You, being a staunch marxist will of course applaud!!!
NObody talks about the oil pipeline in Georgia . . . could it be that the Ruskies are there for the OIL? Just like Bush . . . except the Iraquies are getting rich with their oil . . . you said Bush took it . . . soooo nuts!!!

Jeebus OldStool, like all rightwing nutjobs you're spinning yourself into a heap. Got any ideas? I mean real ideas. Something beyond dismissing Putin as a "crazed little KGB despot." You're such a silly little man.

What can NATO do to prevent Russia from encroaching in the Baltics or the Transdinestra? Fragile democracies need reassurances.

My ideas are going to be different from Oldtool. Not sure if you will agree. First priority now is to enhance the pan-European capabilities of NATO by welcoming the Swedes and the Finns. The second is to have a more active Canadian role in defending New Europe. Forget Afghanistan, common values mean that the defence of New Europe should be paramount to Canada's foreign policy.

Other than that maybe a Patriot missile battery in the Queen Charlotte Islands may be necessary. Who will defend Canada from China, Russia, and North Korea if NORAD and the US is so unreliable?

Who will defend New Europe? How about New Europe? Is Russian aggression a real threat or have we all moved well past that? I think we may have as much or more to gain from engaging Russia and integrating the state and its economy in with the West just as much as feasible. Keep your friends close...

I think we need to be most concerned about containment/encirclement measures that may drive Russia into a more dangerous alliance with China. The more distance we can keep between those two the better.

No one has ever lost by taking the realistic measure of a potential adversary. Exaggerating a threat can be as damaging as underestimating it.

Russia has a hard-earned suspicion, even paranoia, about the West. Like any rising power it has a natural sphere of influence and can be expected to respond to intrusions in that sphere by other powers with demonstrated imperial aspirations.

Bringing NATO to Russia's doorstep is a blatant provocation and probably accomplishes little for us while it costs us a great deal in stability in the Caucasus and Balkans.

Now, unless somebody comes up with a way to make Russia disappear, we have to find common ground on which we can co-exist productively.