At Least One McCain Rejects Facism 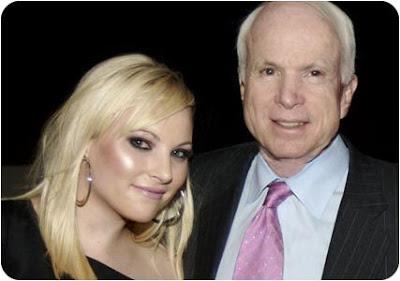 Arizona Senator John McCain would do well to get some integrity lessons from his daughter, Meghan.

The senior McCain, fighting for his political survival, has endorsed his home state's utterly fascist immigration law. The younger McCain, by contrast, knows right from wrong. From CBS News:

In a column published at The Daily Beast, Meghan McCain, who often tries to position herself a spokesperson of sorts for young Republicans, called the new law "seriously flawed" and "essentially a license to pull someone over for being Hispanic."

The new law compels police officers to question a person about his or her immigration status if there is "reasonable suspicion" that person may be in the country illegally. It would also make it a crime under state law to be there illegally. Arizona Gov. Jan Brewer signed it into law on Friday, but some Arizona lawmakers are vowing to fight the measure.

"I believe it gives the state police a license to discriminate, and also, in many ways, violates the civil rights of Arizona residents," Meghan McCain wrote in her column, entitled "Hate the Law, Not Arizonans." "Simply put, I think it is a bad law that is missing the bigger picture of what is really going on with illegal immigration."

John McCain, who faces a tough Republican primary challenge this year, has called the measure a "good tool" for law enforcement. He acknowledged this weekend that there are some questions about whether the new measure can stand up to legal scrutiny, the Arizona Daily Star reports, but he added that lawmakers "acted out of frustration because the federal government didn't do its job."
Posted by The Mound of Sound at 9:52 AM

He sure is Troy. In fact McCain is one of the more stalwart nihilists in the Republican ranks and that's saying a lot. He still hasn't been able to reconcile his loss to Obama. When he contested the 2000 primary against Bush he was the voice of reason and moderation. Now he's just bitter old man McCain - a total sphincter.

Actually champ,your post is 100 percent incorrect.
And remember fascism is a "socialist" idea.
Not a "individualist" "conservative" idea.
You know that.
Why lie?
Fascism is a "collectivist" point of view.
Not mine or any true Conservative.
Thanks anyway.

Ah, you again Anon. Actually, fascism is hardly socialist. It is corporatist but I expect you're far too busy swallowing Glenn Beck to read anything about Mussolini. You confuse democracy with totalitarianism and free enterprise with communism. And that "individualist" stuff? That's bunk but you people seem to love to chew on it. America has become decidedly corporatist with lobbyists for special interests insinuating themselves between government and the population. That's how you wind up with a "bought and paid for Congress" instead of democracy. But they tell gullible saps like you that they're preserving your individualist heritage. They do it because they know you're stupid enough to believe it.

"But they tell gullible saps like you that they're preserving your individualist heritage. They do it because they know you're stupid enough to believe it."

Sorry bud, I'm an individualist.
You're a collectivist.
Those are facts.

The problem with your above quote is the fact is it inherently untrue.
The reason why people like myself despise the Republicans are because they're as corrupt as Obama and his Goldman Sachs buddies.

Every single politician in North America needs to be removed so we can get back to the Constitution.

The Constitution was never meant to be twisted by special interests like we see in Toronto.

The Canadian government is corrupt as hell and do you know why?

It's only because not one of them is in jail right now.

There are dozens if not hundreds of American officials in jail as we debate right now.

Why not any Canadian politicians or elite people?

Anon, you should get yourself a glass of milk and a nice cookie and then straight back to your nap.

I guess I'll interpret that as an "Alinsky" style defeatist ending to our debate.

We weren't having a debate. That sort of exchange only works on facts, not the fantasies that you rely upon.

Do you even know what "collectivism" is? If so you would know your remarks are preposterous and infantile. Collectivism indeed! It's not my fault if you make a farce of yourself. So, yes, move along now.