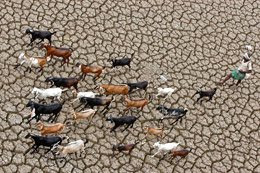 Sounds like a nation under attack. It is. It's India and its attacker is climate change. Indians are beset by an intense heatwave that's been going on for weeks. This is the hottest summer India has had since records were first kept.

The country now awaits rescue in the form of the annual monsoon rains which it is hoped will arrive today. From The Guardian:

"The capital has sweltered under intense heat for weeks though, having endured temperatures of around 45C last week, dust storms and scattered rain brought some relief over the weekend. The new air-conditioned metro has seen record numbers of passengers as travellers abandon buses, taxis and auto rickshaws.

"Parts of the city have suffered prolonged electricity blackouts and, in outlying suburbs, water shortages. In upmarket Mehrauli village, residents were forced to buy from private suppliers plying door to door with tankers. In the new town of Gurgaon, entire apartment blocks have run short. In the city of Nagpur, Maharashtra, petrol pumps ran dry after railway wagons which normally carry fuel were switched to supply water.

Even mountainous Nepal is beset by drought this year. The UN's World Food Programme reports that upwards of two million Nepalese now face a high risk of food shortages.

"The 2008/2009 winter drought - one of the worst in the country’s history - has destroyed crops across Nepal, with wheat and barley production reduced by 14 and 17 percent respectively. Crop yields in some districts in Mid- and Far-Western Nepal – which received less than 50 percent of average rainfall during the period from November 2008 to February 2009 - have dropped by more than half.

"The report – which was produced by MOAC, WFP and the FAO – estimates that 40 of the 75 districts are food deficit because of the drought and also expresses serious concerns about the nutrition situation across Nepal. Half of children under the age of five in these districts are stunted, while 39 percent of children are underweight and 13 percent are severely malnourished."

Here, on Canada's "wet" coast, we gripe about enduring a wet and cold spring. When you look at what's going on around the rest of the planet, cool and wet doesn't seem all that bad.
Posted by The Mound of Sound at 5:33 AM