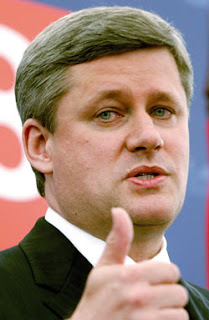 This time we got a smack upside the head from the European Union commissioner José Manuel Barroso. He said it's time for L'il Stevie Harper to get his thumb out of his arse and do something tangible about climate change. He said Canada can't sit by and wait for the rest of the world to act before making its own changes. From CBC News:

"What we don’t want to see, frankly speaking, is that someone does not move because the others don’t move."

He said that if every country adopts Canada's position that it won't start taking drastic action to combat climate change until most other countries in the world agree to do the same, "no one will move in the end."

Barroso said the matter is pressing enough to require immediate political action, despite the economic toll that might result from measures to reduce carbon emissions, which a large body of research has linked to global warming.

"In Europe, we believe, according to science, that there is a real threat to our survival as a civilization. And for the future of our planet and the quality of life of our children ... I think we have to move."

Yeah, Steve. Why do you want to ruin the quality of life of our kids? What have you got against Canadian kids? Why do you hate your own kids?
Posted by The Mound of Sound at 6:44 AM