How the Oligarchs Hoodwinked the American People 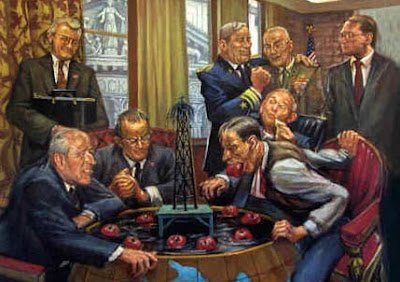 The oligarchs have mobilized Tea Partiers and other supporters of the far right to loathe socialism as the enemy threatening the demise of their grand "city on the hill." It's akin to a phobia with these people and it's constantly fueled by the far right media propaganda machine and public figures like Sarah Palin. They do it because it works. There are enough gullible people in the United States that freebooters like Sean Hannity and rapscallions like Glenn Beck can spin the most outrageous lies and get away with it. Droves of Americans actually believe them. Fox is the country's top cable news service.

Now these opinion-shapers know that America is hardly on the brink of a communist takeover. They know there is no looming socialist threat to American democracy. So why is so much energy invested in setting up socialism as a public whipping boy? Could it be that it serves as a handy scapegoat to mask America's real, existing and spreading threat - corporatism and the oligarchs it serves?

Corporatism, as Mussolini proudly proclaimed, is the beating heart of fascism. It was then, it is now. So long as Americans can still go to the ballot box, however, the spread of corporatism needs to be concealed and what better way of concealing something than distraction in the form of scapegoating?

It wasn't socialists after all who lurked behind the dismantling of America's once powerful manufacturing sector. That was rank corporatism. It wasn't socialists who brought America to its knees under the crushing weight of unimaginable debt. That was the handiwork of a "bought and paid for" Congress where the corporate sector, through lobbyists and cash payouts, has powerfully insinuated itself between lawmakers and the public they're supposed to serve. It wasn't socialists behind the stagnation in working wages and the demise of the middle class in an era that saw enormous wealth concentrated in the top one per cent of the American public. Somebody else must've done that. I wonder who that could be? It hasn't been socialism that kept America tightly bound to the fossil fuel industry and the military-industrial complex and the private sector war waging industry either. Halliburton, KBR and Blackwater are not socialist entities.

Few recognized it at the time but the corporatist oligarchs scored an immensely powerful victory with the demise of America's middle class. In the United States, the middle class was a creature of industrialization and, once in place, was a powerful force for stability and moderation. In its pre-Reagan form, the middle class was a force for democracy and, as such, the natural enemy of corporatism. The middle class served as a buffer between the rich and the poor and formed the vehicle for social mobility, the promise on which the entire "American Dream" is founded. It's no accident that, with the demise of the middle class, social mobility in the United States has plummeted.

The era of the middle class probably began in the Roosevelt/Truman period and extended until the arrival of Ronald Reagan and the advent of globalized, supposedly "free" trade. The beginning of the end of the middle class was ushered in with the export of America's manufacturing base and the introduction of the cancerous FIRE (finance/insurance/real estate) economy, also known as the "new economy" and, more recently, casino capitalism. The financialization of America's economy was the death knell of manufacturing and the middle class. Who wanted to invest massive amounts of money in a manufacturing plant that would produce modest returns when you could simply throw that cash into a financial bubble and reap huge profits? It was madness writ large. A massive number of Americans came to believe that owning a house, of itself, assured them of endless wealth.

The old middle class were savers and builders. When Reagan's "Age of Ruin" took hold they were replaced with a new class, borrowers and spenders. Bank balances plummeted, debt soared, notional wealth (underwritten by foreign lenders) abounded. It wasn't socialists but Ronald Reagan and his disciples who took down the United States of America and opened their country to the oligarchs.

There are anti-democratic forces at play in any democracy. They can be found in the fringes of the right and the left. It's a strong centre that keeps the radical right and radical left safely at bay but that centre did not hold in the United States allowing the radical right to amass considerable political and economic power.

There has been a powerful, even seismic shift to the right in today's America. A recent episode of Bill Maher's Real Time show discussed how Barack Obama, today lambasted as a rank socialist, would have been considered a moderate Republican in the pre-Reagan years. The astute political pundit David Gergen, who worked in the Nixon administration, warned that Nixon would be dismissed as far too left today to be considered for the Republican nomination.

So, as America has - for three decades now - drifted to the far right and fallen into decline accordingly, the public erupts in anger at supposed socialists threatening their way of life. Glenn Beck and Sean Hannity and Rush Limbaugh and all the others have done their job.
Posted by The Mound of Sound at 8:08 AM