The Cost of Tax Cuts 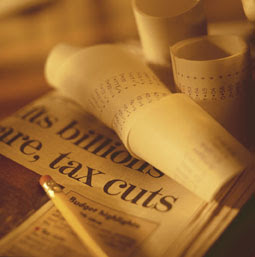 Stephen Harper is on the neo-conservative track to fiscal ruin. He's given up on deficits. How can you tell? By his insistence on going ahead with corporate tax cuts.

Taxes are, of course, how government pays its bills. When tax revenues fall short, government makes up the difference by going into debt, by borrowing. But Bush/Cheney set the bar for fiscal irresponsibility by introducing a witches brew' of borrowing coupled with tax cuts and topped off with two foreign wars and reckless financial deregulation.

When you're already deep in deficits, the only way you can fund tax cuts is by borrowing the money. You get yourself in hock to lenders so that you can take taxpayers off the hook. It's pure, neo-conservative ideology straight from the Bush/Cheney playbook and you can find the payoff in the current disastrous state of the American economy.

Stephen Harper is a neo-conservative ideologue, a reactionary blinded to reality. Harper's tax cuts merely shift the burden to the non-exempted taxpayers - the rest of us - but he hasn't got the guts to be upfront and raise our rates so he defers the impact by borrowing the money we'll have to repay, with interest. And this is the joker who promised to "Stand Up for Canada"?
Posted by The Mound of Sound at 11:30 AM

I'm a Liberal and I happen to like the corporate tax cuts. I was very disappointed when Igantieff back tracked on this issue. I'd rather see the party support a GST increase, which makes far more sense than the current Liberal Party stand. I'll still vote Liberal next time, but I also think we're wrong on this one.

Corporate tax cuts are fine - when the economy and the government's budget can accommodate them. When a government can only fund tax cuts with additional borrowings it's patently dishonest and irresponsible. If you want to introduce tax cuts while in a deficit, have the courage to raise taxes elsewhere and take the consequences. Any consumption tax increase is pretty hard on wage earners in a recessionary economy, a lot would even say unfair.

What do you think of the this by thescottross:Sunday, May 16, 2010
Potential Liberal Policy: Reducing the Capital Gains Tax
In light of the upcoming Liberal Policy Convention in Vancouver I will be posting potential policy proposals for criticism. All comments are welcome and encouraged. Will you be at this Convention MOS?

Ignatieff has already said that we will raise corporate taxes next election to finance certain spending priorities. So the debate in the party is over, at least for now, and these tax cuts will be undone if we're elected.

I just find tax cuts financed by additional debt unconscionable. No Anyong I won't be at the Liberal policy convention. At the moment I'm not even a party member. There's no place within that organization for genuine progressives.