Deepwater Horizon is Not a Petro-Fluke 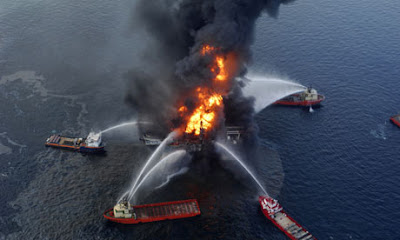 A long overdue, cautionary tale on the global dimension of oil disasters - including Athabasca - from today's McClatchey Newspapers. With attention riveted on the Deepwater Horizon disaster in the Gulf of Mexico, it's a story repeated around the world.

Like many of her neighbors, Celina Harpe is angry about the oil pollution at her doorstep. No longer can she eat the silvery fish that dart along the shore near her home. Even the wind that hurries over the water reeks of oil waste.

Harpe, 70, isn't a casualty of the oil spill in the Gulf of Mexico. She lives in a remote corner of Alberta, Canada, where another oil field that's vital to the United States is damaging one of the world's most important ecosystems: Canada's northern forest.

Across the globe, people such as Harpe in oil-producing regions are watching the catastrophe in the Gulf with a mixture of horror, hope and resignation. To some, the black tide is a global event that finally may awaken the world to the real cost of oil.

...There's no denying that the rust-red plumes of oil and tar balls in the Gulf of Mexico are a potential ecological calamity for American Southern shores. More than half the petroleum consumed in this country, however, is imported from other countries, where damage from exploration and drilling is more common but goes largely unnoticed.

No one's tallied the damage worldwide, but it includes at least 200 square miles of ruined wildlife habitat in Alberta, more than 18 billion gallons of toxic wastewater spilled into the rainforests of Ecuador and a parade of purple-black oil slicks that skim across Africa's Niger Delta, where more than 2,000 polluted sites are estimated to need cleaning up.

..."Spills, leaks and deliberate discharges are happening in oil fields all over the world, and very few people seem to care," said Judith Kimerling, a professor of law and policy at the City University of New York and the author of "Amazon Crude," a book about oil development in Ecuador.

"No one is accepting responsibility," Kimerling said. "Our fingerprint is on those disasters because we are such a major consumer of oil."
Posted by The Mound of Sound at 11:21 AM

What happens when the Gulf oil gusher begins to move north on the Gulf Stream which isn't far from the Newfoundland coast and on through to the English Channel? Whose problem will be then?

There are already reports that part of the oil may be caught in the Gulf's "loop current" which would then jettison it into the Atlantic, threatening the US east coast. No word yet on whether the Atlantic current could sweep any of it up our way.

The oil gushing from the broken pipe, the gigantic plumes of oil lurking beneath the Gulf of Mexico, are close to home and should be enough evidence for us to change our ways. I think there are many who do care, but there is also what James Lovelock has called the "inertia" of humans. We are so dependent on oil and cheap energy, I'm not sure we have the power to change quickly enough.