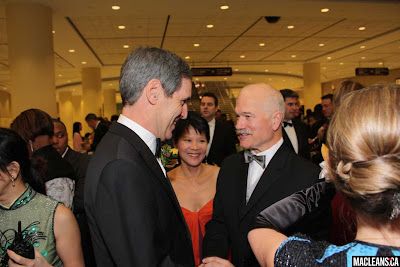 The NDP and the Libs, out to score political points, have passed a climate change bill that calls upon the government to cut Canada's greenhouse gas emissions by 25% from 1990 levels by 2020 but, typical of the Canadian Parliament and its denizens in the House of Commons, it's all greenwash which is a fancy term for environmental bullshit.

The NDP are going to crow about it, it's what they do, but they don't mean it for a second. All it is to them, and to the Libs, is a way to embarrass Harper. It's not that Harper doesn't have it coming. He does, in spades. It's that neither the NDP nor the Libs have shown the slightest willingness to support the sort of measures necessary to achieve the 25 from 90 by 20 cuts.

Iggy, like Harper, is a Tar Sander, through and through. That alone disposes of the Liberals' bona fides in supporting the NDP bill. You can't suck and blow no matter how hard Ignatieff is willing to try.

And let's recall Dion's Green Shift and how gleefully Mr. Greenwash himself, Jack Layton, the disingenuous prick, used it to club the then Liberal leader over the head. The reality is 25 from 90 by 20 will mandate a carbon tax regime, presumably associated with a tax realignment to ease the impact on working Canadians. There's no way around that if the NDP is sincere.

And Ignatieff has already pronounced Dion's plan as "off the table." He went so far as to claim the last election was a referendum on it. This coupled with his enthusiastic support for the Tar Sands only shows that,when it comes to 25 from 90 by 20, Iffy is every bit as disingenuous as that greasy bald runt.

But they've rallied their caucuses to support this bill. Now it's up to Layton and Ignatieff to show they're not complete slime. They owe it to us to explain just how we're to achieve the emissions cuts they've mandated for Harper all within the span of but one brief decade. Specifics, let's hear them. If they can't or won't do that they're just pulling your chain and, for that, the two of them deserve to be tossed.

Figures don't Lie but Liars, oh do they ever Figure. I'm betting this pair of liars are counting on the new Conservative-majority senate to take them off the hook.

The NDP have a right to crow as they have persisted with this bill for years and it will make the government accountable to Canadians for meeting firm targets. It would have been passed prior to Copenhagen had the Libs not sided with the Cons to send it back to committee.

I agree with you the chances of it getting through the Senate are slim, and the challenge of meeting the targets are slimmer. Had the economic stimulus funds been used to invest in renewables, as in the US, the picture would be a lot brighter, but we have to start somewhere.

Perhaps if the NDP and Libs would finally bury the hatchet and put their heads together, they could put their heads together and come up with a plan for a transition from fossil fuels to green energy. There is a detailed discussion of specific ways to meet GHG targets over at Joe Romm's Climate Progress blog. Apparently, predictions are that the US will produce 14% of its' electricity through renewables by 2012.

With the Gulf of Mexico disaster unfolding, and an election looming, it is time for Opposition leaders to stand together for the environment against the Cons.

I don't buy it, LMA. For the NDP this is rank grandstanding and it always has been. They have shown no, I repeat "no", interest in actually promoting real emissions cuts. They're talking major cuts within only 10 years... and it's all talk, nothing more, without a number of concrete proposals of what's going to be cut, where and how much. It's just wind - NDP wind - and that's all it is.

Maybe if enough wind blows, things will start moving forward. The chorus is rising in the US for Obama to take action to put clean energy infrastructure in place and end the addiction to oil. The NDP and Libs can do little if they act alone, but together who knows? Ignatieff has reversed his position so many times, why not on the Tar Sands and all the pipelines to export the oil? Isn't the Gulf of Mexico spill enough to convince him?

I find your optimism refreshing, LMA, I truly do. Here's a suggestion - don't read James Hansen's new book "Storms of My Grandchildren."

Hansen quite powerfully demonstrates why some fossil fuels, notably coal and esoteric oil (tar sands and shale oil) absolutely need to be left in the ground if we're to have any chance of avoiding runaway global warming.

In other words Athabasca has to be shut down,now,entirely, forever. Now when you hear that message come from the lips of any Canadian political leader, including Layton, you will hear something you possibly can believe. If they don't say that it's greenwash, they're lying to your face.

I've had it with covering for these characters, pretending they'll do the right thing when it's obvious with the passing of each day that they won't.

Great post, MoS, and wonderful replies to LMA. People in my community have been very excited about finally holding Harper's feet to the fire on Climate Change with the passage of this bill. You'll recall that heads were bashed in during the last session of parliament when a noisy student protest erupted in the House in an effort to convince MP's to pass this bill.


But you quite rightly point out that there's a lot of wind here, and very little substance. The targets are great...but absolutely meaningless without a coherent plan on how to achieve them. It's all sound and fury, and it signifies nothing...well, nothing more than vote getting, and trying to be seen to be doing something.

The more people understand that this is just another example of politics as usual, the better, because frankly we don't have the time to stand around and continue playing these political games.

This is my first time stumbling across your blog -- but it won't be my last! I was linked here from Saskboy ("Abandoned Stuff" by Saskboy).

Well Steve, I'm very pleased you visited although I take no pleasure in the fact that you agree with my argument on greenwashing. There's nothing remotely enjoyable about being right on this.

I'd like to hear from someone wise enough to figure out what it's going to take to get these, our would-be leaders, off their cozy perches. They actually stand as a bottleneck to progress because they deceive the public into believing they intend to do what so many of us so badly want them to do.