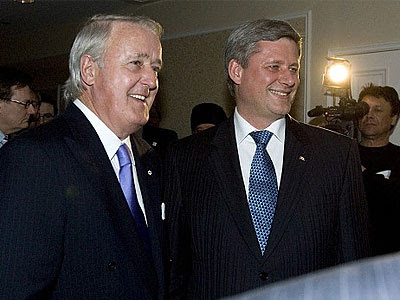 The Oliphant report into Mulroney/Schreiber contains a few scathing findings about the former prime minister and his credibility. From the G&M:

The conduct exhibited by Mr. Mulroney in accepting cash-stuffed envelopes from Mr. Schreiber on three separate occasions, failing to record the fact of the cash payments, failing to deposit the cash into a bank or other financial institution, and failing to disclose the fact of the cash payments when given the opportunity to do so goes a long way, in my view, to supporting my position that the financial dealings between Mr. Schreiber and Mr. Mulroney were inappropriate,” Mr. Oliphant said.

Unfortunately Harper ran effective interference for Mulroney, forbidding Oliphant from looking into the Airbus Affair, which pretty much takes Lyin' Brian off the hook forever. That is... unless Schreiber has a bombshell or two left to deliver from his German prison cell. Still and all, Oliphant reveals Mulroney as a devious, unethical, flat out lying bastard.
Posted by The Mound of Sound at 10:33 AM

I did not expect much from Oliphant any way as he worked under Mulroney.

I don't know, LD, but given the tightly restricted terms of reference Harper imposed, Oli did go some distance to chastise Muldoon. He wasn't allowed to come out and accuse Mulroney of perjury but "patently absurd" conveys that very point.

Given that Mulroney was misleading on his sworn examination and that his excuse for what is probably perjury is "patently absurd" it should be Harper's next job to recover that $2-million plus interest.