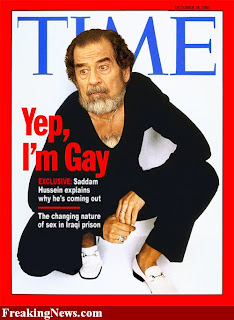 Figured that'd get your attention. Some at the CIA were even counting on that. The Guardian reports that the CIA entertained the idea of staging a gay sex tape involving a Saddam impersonator and a teenage boy but top officials never gave the final go ahead:

...in a scenario more the preserve of careless Hollywood starlets such as Paris Hilton and Kim Kardashian, the CIA appears to have plotted to undermine Saddam Hussein with a gay sex tape.

According to the Washington Post's security blog, some of America's spooks believed that shooting a fake video of Saddam cavorting with a teenage boy might destabilise his regime in the runup to the US-led invasion in 2003. "It would look like it was taken by a hidden camera. Very grainy, like it was a secret videotaping of a sex session," the Washington Post quoted one former CIA official as saying.

Nor was the Saddam sex tape the only idea floating around the more bizarre corners of the CIA's Iraq Operations Group. Other ploys involved interrupting Iraqi television with a false newsflash that would announce Saddam was handing over power to his hated and feared son Uday. The presumed idea was to shock the Iraqi people into rising up against their leaders and thus make the invasion a lot easier.

Perhaps thankfully, the tape and fake news broadcast were never made and the Post reported that top CIA brass repeatedly rejected the ideas.

But that did not stop a CIA video being shot of a fake Osama bin Laden sitting around a camp fire, drinking booze and boasting of his own gay conquests.

The video apparently used some of the CIA's "darker skinned" employees as extras playing the terror chief's henchmen. It does not seem to have been released.

Hey, wait a second! How about a Steve Harper gay sex tape? Anybody got the number for those CIA guys?
Posted by The Mound of Sound at 7:03 AM

Email ThisBlogThis!Share to TwitterShare to FacebookShare to Pinterest
Labels: CIA