UN Calls for End to Over-Fishing 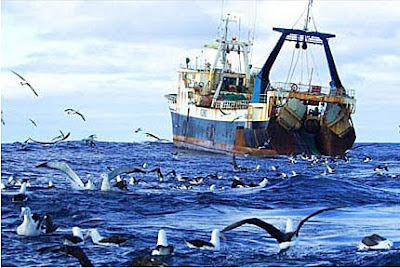 The UN's environment branch, UNEP, gave a sneak preview of its green economy report that will be published in October. It said that if the world remained on its current path of over-fishing, by 2050 all fish stocks could have become uneconomic to exploit or actually extinct.

Pavan Sukhdev, who heads UNEP's green economy initiative, said: "That is not as absurd as it sounds, as already 30% of the ocean fisheries have collapsed and are producing less than 10% of their original ability."

At the heart of the UN's analysis is the $27bn of subsidies it estimates is being injected into fishing every year, mainly by developing countries. The UN says the subsidies are huge in terms of the scale of the industry – amounting to almost a third of the $85bn total value of fish caught.

Among those subsidies, the UN defines just $8bn-worth as "good" in the sense of encouraging sustainable fishing of healthy stocks. Most of the subsidies are "bad", meaning they lead to overcapacity and exploitation, and about $3bn of the subsidies are "ugly", actively leading to the depletion of fish populations.

Among the most egregious practices targeted by the report are inducements to increase the size of massive trawler fleets that are among the main culprits of overfishing, and fuel subsidies on fuel for fleets.

"We are paying ourselves to destroy the very resource on which the whole fishing industry is dependant. We are in the process of eroding the natural capital that underpins our economies," said Achim Steiner, UNEP's director.

The UN estimates 20-million jobs need to be cut from the global fishing industry.
Posted by The Mound of Sound at 10:18 AM

Email ThisBlogThis!Share to TwitterShare to FacebookShare to Pinterest
Labels: fisheries