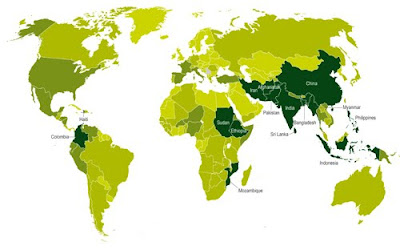 The latest NRDI is out. The National Disaster Risk Index 2010 depicted in the map above is, of all things, a business tool. No, it's not the ranting of some global warming conspiracist. Its stated purpose is to, "enable businesses and investors to identify risks to international assets." In case you haven't figured it out, the darker the green, the greater the risks.
The NRDI is a product of Maplecroft, an industrial risk management company.
"There are 15 countries rated as "extreme risk" in the ranking, including N11 members Bangladesh (1), Indonesia (2) and Iran (3), with Asian heavyweights, India (11) and China (12) also in the highest risk category. These are the same countries that are projected to set leading growth trends amongst emerging economies. According to IMF estimates Bangladesh grew 5.49% in 2009, Indonesia 4.54% and Iran 1.82%, whilst China grew 8.73% and India 5.66%. These countries also form important links in the supply chains of many companies.
...Poverty is an important factor in countries where both the frequency and impacts of natural disasters are severe," said Maplecroft Environmental Analyst, Dr Anna Moss. "Poor infrastructure, plus dense overcrowding in high risk areas like flood plains, river banks, steep slopes and reclaimed land continually result in high casualty figures."
..."Due to climate change, extreme hydro-meteorological events are predicted to increase," continued Dr Moss. "Business risks include damage to assets; interruptions to operations from the breakdown of infrastructure like transport and power networks; plus there can be devastating impacts on local workforces. This makes it essential that businesses plan for the possibility of a disruptive natural disaster."
According to Maplecroft's results, it is not just developing nations that organisations need to have contingency plans for, as three G8 member states are rated as "high risk." France (17) and Italy (18) are the most vulnerable countries in Europe; mainly because of the heat waves in 2003 and 2006 where over 40,000 people died, whilst the U.S. (37) is highly susceptible to hurricanes and storms, which have claimed 8,400 lives over 30 years. Japan (41), Germany (50), Russia (54) and Canada (107) are all rated "medium risk," whereas the UK (111) is considered "low risk."
Meanwhile, it appears the 2010 hurricane and tropical storm season is off to an early start. Reuters is reporting that Tropical Storm Agatha has brought deluges to Central America that triggered mudslides killing at least 96 people.
Posted by The Mound of Sound at 7:58 AM