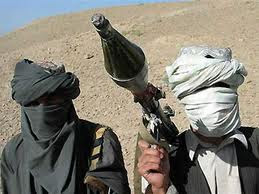 When the West stops playing whack-a-mole in Afghanistan, the Talibs, with the backing of Pakistan, are poised to return to power.   That is the conclusion of a secret US military report, The State of the Taliban, 2012, that has been leaked to the BBC and The Times.

Islamabad is supposedly furious that the Americans would accuse their military intelligence service, the ISI, of conniving with the Taliban, the worst kept secret in that entire region.

The US report also details widespread collaboration between the insurgents and members of the Afghan police and army.  I wonder how many of these double-agents have been trained by our forces.

Underlying all of this is the reality everyone from that region knows - we are not there to stay, we never were.   When we finally leave, it becomes their show again.   They get to play their game, by their rules.

The report's conclusions, "that the Taliban's strength and morale are largely intact despite the Nato military surge, and that significant numbers of Afghan government soldiers are defecting to them, are in stark contrast to Nato's far more bullish official line, that the insurgent movement has been severely damaged and demoralised."

The American report pretty much writes the obituary for NATO's futile mission in Afghanistan.  They Tried, They Died, They Left.  Even Canada sacrificed so many lives for such an empty gesture.

The only aspect of Canada's mission that made any sense was the initial commitment authorized by Paul Martin.   That was when we decided to send a small contingent to house sit Kandahar province while the Americans were supposedly finishing up in Iraq.  Only the Americans got bogged down in Iraq and a successor government decided we should stay.   When this became Harper's war it went straight downhill.   Then again, he was only in it for the political points and he didn't mind spending Canadian lives to buy those points.
Posted by The Mound of Sound at 6:20 AM