The Fantastic Voyage of the Rubber Duckie 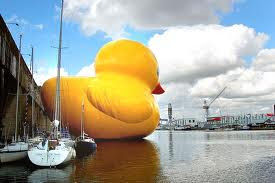 20-years ago off the Aleutians a cargo ship lost some containers in a heavy storm.   Among that cargo were nearly 30,000 bath toys.   Since then some of these toys have circumnavigated the world.

Tracking the several paths those toys wound up taking has given science valuable insights into ocean currents.   But at the end of the day, those toys and the plastic debris that now fills vast tracts of ocean will take their toll.

Never mind that only 5% of plastics actually ends up getting recycled. Never mind that the plastics industry stamps those little triangles of chasing arrows into plastics for which no viable recycling method exists. Never mind that plastics consume 400m tons of oil and gas every year and that oil and gas will in the not-too-distant future run out. Never mind that so-called green plastics made of biochemicals release greenhouse gases when they break down. What's most nefarious about plastic is the way it pretends to deny the laws of matter, as if something could be made from nothing; the way it is intended to be thrown away but chemically engineered to last. By offering the false promise of disposability, of consumption without cost, it has helped create a culture of wasteful make-believe, an economy of forgetting.
Posted by The Mound of Sound at 9:38 AM