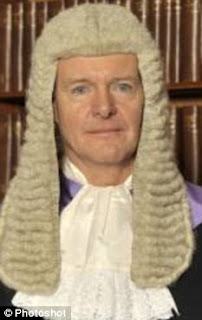 When is this madness going to stop?  This time it's Britain.   There Judge David Farrell sentenced two men convicted of raping an 11-year old to just 40-months imprisonment.   The judge accepted their claim that she "looked 14" and gave them a reduced sentence on finding the child was a "willing participant" even though she was five years shy of the age of consent.

Judge Farrell said there were exceptional features to the case which led him to reduce the sentences to 40 months.

The two men had maintained they believed the girl was at least 14, and, after viewing evidence, the judge agreed she appeared that age.

He said the prosecution accepted that the girl had not objected to what was happening, and the men had pleaded guilty at the earliest stage and did not have previous convictions for sexual offences.

Farrell, you moron, she was ELEVEN years old.   You even found the crime was "aggravated" by the rapists recorded it on their cellphones  and that there was evidence that the recording had been circulated.
Posted by The Mound of Sound at 10:09 AM

This is disgusting. Is it now time men ought to be made to take a course as to what bad behaviour toward women is? Many men seem to think it is fine to make sexist remarks towards women and that women and young girls ask to be raped. When is society going to demand many curb their sick attitude toward women when it comes to sex? Locally, a 30 year old teacher was arrested this past weekend for being caught in a compromising situation with a fourteen year old student. Why do many men think it's allowed?

I hope that judge gets his. What a stupid asinine judge he is. He should be put in prison, for his promoting of rape of any age. A little 11 year old girl, being raped is a crime, that should be punished by at least 20 years in prison.