If you watched the Super Bowl, not that there's really something wrong with you if you didn't, you might have enjoyed the half time show.   Madonna staged an elaborate presentation and did a decent job of it.   That said it was the Super Bowl and it wouldn't be right if there wasn't a bit of controversy.

Part of that came when one of the guest artists, M.I.A. flipped the bird sending the straightlaced into a furious rage.   Made me wonder about "the bird" and how that all began.   Seems 'the finger' is as old as civilization itself.

As many writers have pointed out, the middle finger became a symbol of the penis at least 2,500 years ago. In Aristophanes’ 423 B.C.E. play The Clouds, the character Strepsiades jokes that when he was a boy he kept time by tapping his phallus rather than his middle finger. If showing someone the middle finger wasn’t already a common insult at that time, it became one within the next century. The Greek philosopher Diogenes showed his middle finger as a sign of disrespect to the orator Demosthenes in the fourth century B.C.E. (The ancient Greeks also associated the penis with birds, although there’s no evidence that they ever referred to the middle finger itself as a bird or showing it to someone as “flipping the bird.”) The ancient Romans called the middle finger digitus impudicus, or the impudent finger. In a show of superiority, eccentric Roman Emperor Caligula made senators kneel and kiss his middle finger, which was understood to represent his phallus.

So there, we got that sorted out.   You might have also noticed a guy bouncing around impressively on what looked like a low-slung tightrope.  This guy: 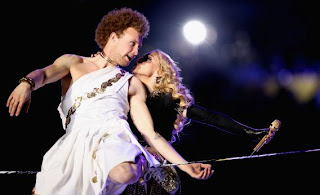 It turns out he goes by the name of Sketchy Andy and this is what he likes to do for fun: