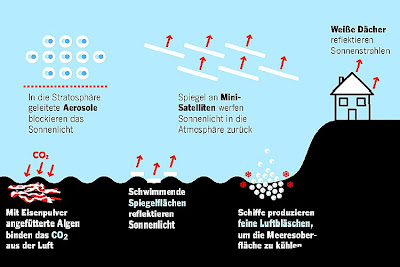 Eco-sleight of hand may reach stratospheric proportions if Bill Gates and other members of his Club of Billionaires succeed in pushing geo-engineering as the solution to anthropogenic climate change.

The allure of geo-engineering is powerful, seductively irresistible to those who are themselves powerful and rich.  It's a multi-faceted gambit.   It buys time.  Why worry so much about man-made warming now if, when necessary, we can somehow seed the atmosphere and induce an offsetting cooling effect.  It saves massive amounts of money.  Why 'upset' the economy now by switching to a decarbonized economy and society when geo-engineering solutions are cheaper.  It creates the potential for almost unimaginable wealth in the future.   We have to act now, the time for pursuing alternative energy solutions has passed, so your only real hope is to pay us to implement geo-engineering mechanisms to save your backsides and keep your toxic economies ticking.

In some ways, geo-engineering seems the environmental equivalent of feedlot cattle production.   Once it takes hold, you're stuck with it.

The doctors of disaster capitalism are gathering to plot the future of geo-engineering.     Names like Bill Gates, Richard Branson and Canadian Tar Sands magnate Murray Edwards are funding studies into geo-engineering options to "save" the planet.


"We will need to protect ourselves from vested interests [and] be sure that choices are not influenced by parties who might make significant amounts of money through a choice to modify climate, especially using proprietary intellectual property," said Jane Long, director at large for the Lawrence Livermore National Laboratory in the US, in a paper delivered to a recent geoengineering conference on ethics.

"The stakes are very high and scientists are not the best people to deal with the social, ethical or political issues that geoengineering raises," said Doug Parr, chief scientist at Greenpeace. "The idea that a self-selected group should have so much influence is bizarre."

But Gates, Branson et al did not get where they are by failing to spot opportunity.   How could they be expected to miss the rich opportunities from political ineptitude and intransigence just laying about for the picking?


The shortfalls and pitfalls of geo-engineering are myriad.   Massive amounts of research into climate history going back hundreds of thousands of years has been required just to understand how we got to where we are today and what probably awaits us.  It has taken us decades to synthesize all this information, study and analysis into a coherent theory of anthropogenic global warming.   Yet we're to pin the future of mankind on possible solutions of questionable value, indeterminate longevity and with unknown side effects and potentially irreversible consequences.

It's entirely foreseeable that geo-engineering will be, at best, a lifeboat for the first-class passengers and a dark, final swim for everyone else.   Just as global warming is impacting different parts of the world in different ways, to different degrees and at different speed, it's just as likely that geo-engineering, the ultimate "one size fits all" response will be anything but universal, at best, and, at worst, may benefit a few regions at the expense of the many.

And we need only look at the developed world's magnanimity  toward the most vulnerable countries when it comes to helping them cope with the impacts of global warming to get an idea of just how generous we're likely to be when it comes to spending vastly more on them to extend geo-engineering benefits their way.   It may actually cost far more to geo-engineer our own way out of this if we try to do it for the whole planet.   Costs and efficiency could well dictate that to save ourselves we really have to throw the rest of mankind to the wolves.
Posted by The Mound of Sound at 9:37 AM

I wonder where the climate change deniers will come down on this issue. On one hand it lends credibility to the global warming consensus that they so despise. On the other, geo-engineering will let them keep burning oil like it's going out of style.

You're right. They know their global warming strategy is not about refuting science but buying time to defer unwanted action. Geo-engineering can be played out to the same purpose. "Don't worry, we'll fix it when the time comes."

What vexes me is that this is also an approach that responds to global warming in isolation and creates a distraction from the several other, potentially existential challenges we must meet if we're to see mankind through the 21st century.