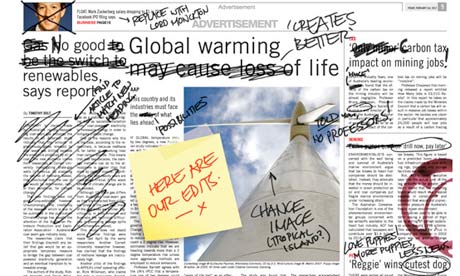 What you're looking at appeared in full page format in the Sydney Morning Herald.  It was published in reaction to a call by whacko global warming denier Lord Monckton for Australia's "super rich" to fund an Aussie equivalent of FOX News.

The ad/public service announcement was the doing of an advocacy group, Get Up, in response to a coal baroness' recent purchase of a big chunk of Australian media giant, Fairfax Media.   Gina Rinehart is known for, "her fiercely right-wing politics and promotion of climate sceptics such as Lord Monckton."

Get Up has posted a video of Monckton addressing a board meeting of a 'free market think tank', the Mannkal Economic Education Foundation, where he sings the praises of people like Glenn Beck.

Email ThisBlogThis!Share to TwitterShare to FacebookShare to Pinterest
Labels: Australia