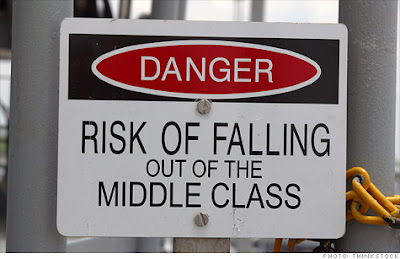 What goes up must come down.  Who knew that might be the epitaph of America's once mighty Middle Class?

Robert Reich sees through the latest unemployment numbers.  They may look good but they're a harbinger of a new "downward mobility."

"Most of the new jobs being created are in the lower-wage sectors of the economy – hospital orderlies and nursing aides, secretaries and temporary workers, retail and restaurant. Meanwhile, millions of Americans remain working only because they’ve agreed to cuts in wages and benefits. Others are settling for jobs that pay less than the jobs they’ve lost. Entry-level manufacturing jobs are paying half what entry-level manufacturing jobs paid six years ago.

Other people are falling out of the middle class because they’ve lost their jobs, and many have also lost their homes. Almost one in three families with a mortgage is now underwater, holding their breath against imminent foreclosure.

But Romney doesn’t like safety nets to begin with. He’s been accusing President Obama of inviting a culture of dependency. “Over the past three years Barack Obama has been replacing our merit-based society with an entitlement society,” he says over and over, arguing that our economic problems stem from a sharp rise in dependency. Get rid of these benefits and people will work harder.

...The real scandal, as I’ve said before, is America’s safety nets are too small and shot through with holes. Only 40 percent of the unemployed qualify for unemployment benefits, for example, because they weren’t working full time or long enough on a single job before they were let go. The unemployment system doesn’t recognize how many Americans work part time on several jobs, and move from job to job.

Romney’s budget proposals would shred safety nets even more. According to an analysis by the Center on Budget and Policy Priorities, his plan would throw 10 million low-income people off the benefit rolls for food stamps or cut benefits by thousands of dollars a year, or some combination. “These cuts would primarily affect very low-income families with children, seniors and people with disabilities,” the Center concludes.

At the same time, Romney’s tax plan would boost the incomes of America’s most wealthy citizens, who are already taking home an almost unprecedented share of that nation’s total income. Romney wants to permanently extend George W. Bush’s tax cuts, reduce corporate income tax rates, and eliminate the estate tax. These tax cuts would increase the incomes of people earning more than a million dollars a year by an average of $295,874 annually, according to the nonpartisan Tax Policy Center.

The downward mobility of America’s middle class is the big news, but the GOP apparently hasn’t heard about it. Maybe it’s too hard to hear about from that far away.

And I thought one of the things Americans are proudest of is their revolution.   Maybe it's time they revisited the idea.
Posted by The Mound of Sound at 11:50 AM

They won't revisit revolution. Too many of them are either cowards or in la-la-land.