Were Woodware & Bernstein Played by a Man With An Axe To Grind? 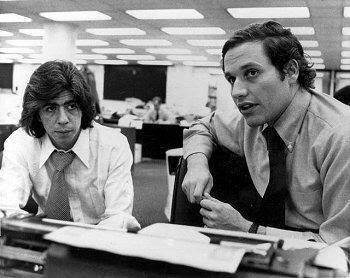 Washington Post scribes Bob Woodward and Carl Bernstein have, for decades, been widely credited with taking down Richard Nixon.   The popular narrative goes that they were fed their story by a shadowy informant they called "Deep Throat" who wanted to stop a corrupt president and his aides.

A new story emerging claims that Woodward and Bernstein were played by their source, Mark Felt, who fed them truths, half-truths and outright fabrications not to bring down Nixon but to knock out his rival at the FBI and clear the way for his own ascendancy to the top job.

Felt began systematically leaking material from the FBI’s Watergate investigation. He knew Nixon, whose paranoia about leaks was legendary in Washington, would figure out that the source was somewhere in the FBI. Gray would be blamed, lose his job (he hadn’t yet been confirmed by the Senate and was officially only acting director) and Felt would be the logical replacement.

Felt played the Washington media like a mighty Wurlitzer, planting his leaks not just with the Post but Time magazine, the Washington Daily News and anybody else who would take them. As his scheme began to work, with Nixon pressing Gray hard to plug the leaks, Felt stood smugly by as other FBI officials were demoted or threatened with the loss of their jobs.

Contrary to the heroic myth that he always pointed reporters in the right direction, Felt’s leaks were often either carelessly inaccurate or maliciously false.


At this point in their careers, Woodward and Bernstein have already long gotten just about everything career advancing they could have out of Watergate.  Yet Woodward will be compelled to respond to the allegations that he and his partner, along with their newspaper, were played and that the account they spun afterward simply wasn't true.
Posted by The Mound of Sound at 7:25 AM

Email ThisBlogThis!Share to TwitterShare to FacebookShare to Pinterest
Labels: Watergate

Howdy I am so grateful I found your blog, I really found you by error, while I was looking on Bing for something else, Regardless I am here now and would just like to say kudos for a marvelous post and a all round entertaining blog (I also love the theme/design), I don’t have time to go through it all at the minute but I have bookmarked it and also included your RSS feeds, so when I have time I will be back to read more, Please do keep up the excellent work. wholesale gifts and homewares