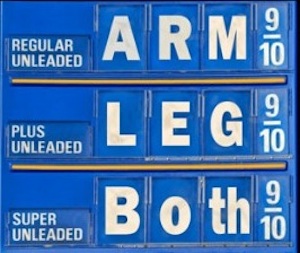 An eye-opening analysis from McClatchey Newspapers.   As in Canada, American pump prices are soaring.  Republican candidates are jumping aboard to blame Obama.

But the newspaper points out to two facts that point to the real culprit.  Fact one - Americans' demand for gasoline is trending downward.  Fact two - so far has American demand lagged behind production that, wait for it, the US has become an exporter of gasoline.

What's driving the increases, McClatchey concludes, are the omnipresent speculators:

Financial speculators are piling into the market, torquing the Iranian fear factor into ever-higher prices.

"Speculation is now part of the DNA of oil prices. You cannot separate the two anymore. There is no demarcation," said Fadel Gheit, a 30-year veteran of energy markets and an analyst at Oppenheimer & Co. "I still remain convinced oil prices are inflated."

Consider that light, sweet crude trading on the NYMEX changed hands at $79.20 a barrel just four months ago, but soared past $106 a barrel Tuesday afternoon, partly on news that Iran would halt shipment of oil to Britain and France. But those countries already had stopped buying Iranian oil. And Didier Houssin, the International Energy Agency's director for energy markets and security, said that "there are alternative supplies that can make up for any loss of Iranian exports," The Wall Street Journal reported.

Still, oil's price shot up because it trades in financial markets, where Wall Street firms and other big financial players dominate the trading of oil, even though they have no intention of ever taking possession of the oil whose contracts they are trading.

And that is a look into the dark, enormously destructive forces behind predatory free market power.   It's the inevitable follow-on once perpetual growth hits a wall.  It is why Goldman Sachs is perhaps the major contributor to the now permanent global food price crisis.  It is what is quietly happening to the multinationals working to corner world water markets.  These characters are now speculating on peoples' very survival and the stability of nations.

This shit has to stop.

I have asked members of the Cons, the Liberals and the NDP this simple question — and I have yet to get an answer:

WHY DO CANADIANS HAVE TO PAY WORLD SPOT PRICES FOR CANADIAN OIL?

If you live in Venezuela, Chavez gives his citizens a break, as does Mexico, Algeria, Libya, etc., etc. Yet Stevie thinks you should pay the same price as countries that don't have ANY oil.

Actually Ed there was a time we didn't. Back in the early 70s, gas was 59/gal in Toronto but just 29/gal in Ottawa. From the Ottawa valley east Canadians paid world oil prices. West of that we paid a hefty premium to subsidize Alberta oil production.

Back then Alberta would have raged had it been told to accept world oil price. Only when the cartel came into being and sent prices soaring did Alberta demand the world price. They got it and have been getting it ever since. At one point, fearing a drop in world prices, Ralph Klein tried to negotiate a "floor" price. He wanted it both ways. Silly old sot.

And actually we pay more than world prices if you calculate the resource values, environmental costs and subsidies we provide Big Oil. We're even allowing them to import 'guest workers' so they can dodge having to pay Canadian wages. Such is life in a true petro-state.

Thanks for the information.

But the greed should be a political issue. The world spot prices are putting severe stress on all of rural Canada, which was built by the Model T and cheap oil.

This stress is, well just look at small-town Canada.

As well, the oil, the land are owned by the Canadian people and companies are licenced by the Feds. So the concept of reduced prices for domestic consumption is not preposterous.

IMHO the Liberals or the NDP should look at this.

Why do Canadians have to pay world spot prices for Canadian oil? Due to the fact that we sell our oil at cheap prices to everyone else that is why.