Pentagon Ups the Ante on Iran 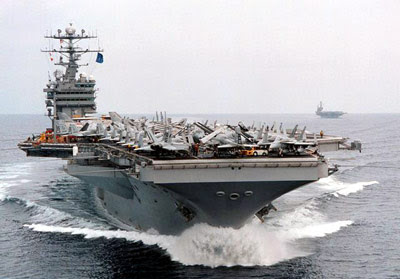 Count the carriers.   One US Navy fleet aircraft carrier in the Persian Gulf is routine.    Now there are two, the Lincoln and the Vinson.   A third is scheduled to deploy to the Gulf in March and a fourth, the USS John Stennis is loitering just days away.

The United States doesn't tend to marshal that much firepower until it is ready to pull the trigger.

A former British ambassador to Tehran says the West may be dangerously miscalculating.  "I don't think they are playing Iran anything like as well as they think they are. The oil embargo tends to give those elements in Iran who want to have maximal defences, including nuclear defences, added weight to their arguments. Also they are poking Iran with a sharp stick but this is not accompanied by a new negotiating incentives."
Posted by The Mound of Sound at 7:17 AM

Email ThisBlogThis!Share to TwitterShare to FacebookShare to Pinterest
Labels: Iran