What Were We Thinking? Libya Dissolves. 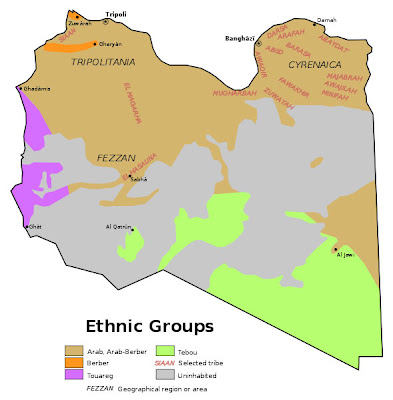 Steve Harper likes to boast how Canada and our NATO allies saved Libya by bombing the hell out of Gaddafi's forces.   It sounds nice but it's hogwash.

As the United States and coaltion did in Iraq, as we all did in Afghanistan, so we got into the Libyan war utterly indifferent to realities on the ground.

So Libya, quite predictably, stands poised on the verge of a civil war that's probably inevitable at this point.

The government of the interim Prime Minister, Abdel Rahim el-Keeb, is virtually paralysed by rivalries that have forced it to divide power along lines of regions and personalities, by unreachable expectations that Muammar Gaddafi's fall would bring prosperity and by powerlessness so marked the national army is treated like another of the many warring militias.

This week one militia assaulted another militia at a seaside base in Tripoli to rescue a woman who had been abducted.
When the guns fell silent, briefly, the scene that unfolded felt as chaotic as Libya's revolution - a government whose authority extends no farther than its offices, militias whose swagger comes from plentiful guns and residents whose patience fades with every volley of gunfire that cracks at night.

This didn't have to happen.   There was an alternative, one that would have quickly ousted Gaddafi and left no room for the warlords and religious extremists to undermine Libya's future.   Instead we let the Libyan problem fall into the hands of the West's astonishingly incompetent military and political leadership to achieve the predictable result that besets the Libyan people today.
Posted by The Mound of Sound at 10:21 AM

Email ThisBlogThis!Share to TwitterShare to FacebookShare to Pinterest
Labels: Libya

Could it be the country is left in this manner for the sake of the dollar? As in, the bigger the mess, the more money spent on arms. So there could me method in the madness.

I think that Naomi Klein made a case for this. Personally, I think that the more in shambles a country is, the easier it is for multinationals to operate without regulations or oversight. Chaos doesn't have to interfere with profit making and the private "security" business is booming.

What makes anyone think getting rid of Ghadaffi was a goal the Libyan people wanted in the first place?....Here is the RULE people any IMPERIALIST adventure is automatically on the wrong side of history. Look at Afghanistan, Look at Iraq, Look at Libya and how that "revolution" came from outside the country and they are doing the same thing to Syria on an even grander scale. Any take of Humanitarianism from the West is absolutely complete hogwash and is to be rejected at once. Even Haiti-a natural disaster not one dime of relief money has gone to the government of Haiti.....the Imperialists and all their NGO framer's cant' even help in a natural disaster anymore how much worse does it have to get before we get it. Take it from there.
RR