The F-35 was a good idea that simply kept going downhill.   Lockheed was going to build the F-22 stealth fighter and the F-35 stealth light attack bomber.   But it was a sucker's bet on the longevity of stealth technology.  And we now know that Israeli and American defense planners have realized this stealth is a "perishable" technology with an effective life of just five to ten years into the future.  What will they call it after that?   The No-Longer Stealth Fighter?

Without stealth the F-35 is a dog.   Even the much superior F-22 has been proven vulnerable to the Eurofighter Typhoon in close-in air combat, the dogfight.

Maybe we should tell the Americans we'll take a pass on the F-35 and wait for the 6th generation aircraft they have under development.  Like the Americans, let's go drone.

In the States the Air Force and the Navy and several manufacturers are coming out with designs for unmanned combat aircraft.   The designs are remarkably similar and resemble the RQ-170 drone the Americans gifted to Iran just before Christmas.   Here's a picture of the Northrop-Grumman X-47B under development for the U.S. Navy. 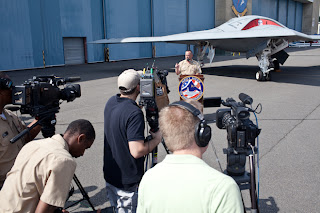 Once we give up the delusion that the F-35 is a viable air combat fighter - and it's not - then it is realistic to compare the F-35 to drones as light strike bombers.   Like  the Americans, I'd bet on the drones.
Posted by The Mound of Sound at 9:39 AM