Aviation Photo of the Day

Quite possibly the best fighter of its time. The Canadair Sabre in the livery of the RCAF aerobatic team, the Golden Hawks. 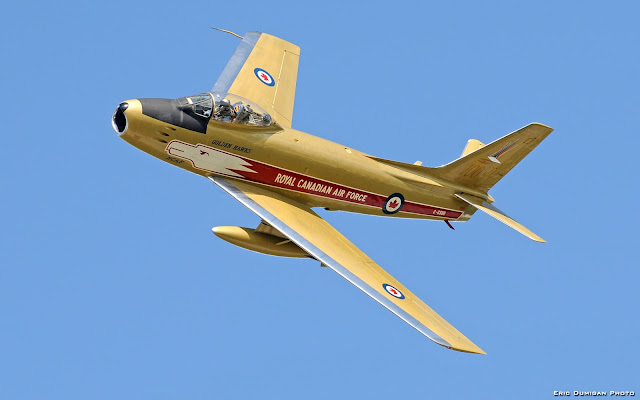 This is actually a Mk. 5 Sabre. The ultimate was the Mk. 6, some of which were purchased by the US Air Force and taken to Korea for combat evaluation. The Americans found Canada's version of their frontline fighter with its Orenda engine and advanced controls superior in almost all aspects.
Posted by The Mound of Sound at 6:07 PM

When I was a kid, I wanted to be a fighter pilot...in the Second World War, meaning that, since I was born in 1950, I would have to find Vonnegut's chronosynclastic infundibulation or some such thing. Eventually I got over the infatuation with aircraft, or so I thought. My younger brother sent me a picture of a TBF Avenger that was parked on the apron of his local airport (Olympia, Wa.) and it was pretty amazing what it stirred up in the mud that passes for my brain. Seems I still get a little soft in the head with certain forms of aviation porn. Thanks.

I was riding my bike home from a trip to Victoria when I spotted the Snowbirds and this Sabre on the ramp at Nanaimo's pretty small airport. I pulled in and went around to talk to the crews and check out their rides. Those Tutors are, like the rest of us, getting old. The Sabre though looked mint. These are powerful recruiting tools. My Dad took me to see the Golden Hawks. I was hooked. When the necessary number of years had passed I was in the recruiting office.

I worked at a small flight school where a farmer brought in a photo of an F-86 that had made an emergency landing on our airfield. It was a beautiful thing.

@ Anon - the F-86 had a reputation as being the most belly-landing friendly airplane of them all. A nice grassy stretch or a ploughed farm field were ideal.