If You Want to Stop Hearing These Stories, You Have to Act Now 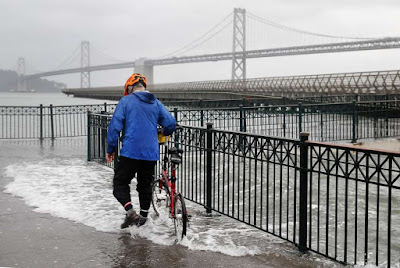 Interesting new development reported at phys.org (yeah, as in "physics"). Scientists have discovered that sea level rise in the Pacific Ocean accurately predicts global temperature changes. I know, I know, who cares? Wait just a minute.

Okay, now let's unpack that. We're already above 1 degree Celsius in heating since the pre-industrial era. Our leaders have agreed that the "never exceed" point for warming, the point at which we may have a reasonable chance of avoiding catastrophic, runaway global warming is 1.5 degrees Celsius. In other words we have less than half a degree Celsius to play with before we blow through that 1.5 C limit. Only we used up 0.18 degree Celsius in 2015 and we stand to add another 0.10 C this year. Wait a second. Hell's Bells - that's 0. 28 degrees Celsius of our somewhat less than 0.5 degrees Celsius limit and we've done it in just TWO years.

If we had a plan, a workable agreement, to really slash our carbon emissions over the next few years, we might have cause for hope. We don't have such a plan, there is no agreement, and every million tonnes of oil and gas and coal we continue to burn will create greenhouse gases that go directly atop the existing figures. It's too late to fend off serious, even deadly, climate change impacts for the next several centuries but, and here's the point, we can always continue to make the future far worse than it need be. We can make the future worse and, with a Parliament chock full of Petro-Pols, you can be sure we will.

An old friend came to visit recently and at one point we somehow wound up watching a bit of YouTube. In particular we watched Russian dash cam video. As we went through it I was struck that it seemed to resemble our government's approach to climate change.  Watch it if you like, as little or as much as you can bear. Then ask yourself...