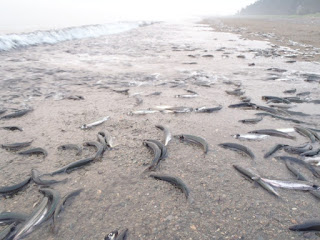 I've written a number of posts on the influx of marine life into our local waters around Vancouver Island. It's like the entire food chain has shifted north, away from the warming Pacific waters to the south. It begins with bigger schools of herring and the arrival of sardines. As the prey fish migrate so too do their predators. As a result we've seen large increases across the board from prey fish to schools of dolphins, transient orcas, seals and sea lions, various once rare fish species, even pelicans.

Not surprisingly, Eastern Canada is witnessing the same thing. CBC News reports there's been a big uptick of marine biodiversity in the St. Lawrence River. Again it seems that the migration of prey fish, in this case capelin, may be the proximate cause.

She said in some places off the Gaspé coast, there are so many capelin that if you take a bucket out into one foot of water, you could catch a few.

One explanation could be the warmer water — the water temperature is about two degrees higher than it was a decade ago, she said.

"All species will adapt to that, either physically [to] be able to live in the warmer environment, or they'll move somewhere else" and be replaced by warm-water species moving north, she said.

Even Maine's vaunted lobster fishery is being hammered by warming waters. Fishermen there are coming up empty-handed as the lobsters are migrating into cooler Canadian waters.

This should be a warning to the world that climate change is upon us and it's coming on faster than we had imagined. There's no hoax behind the migration of fish, marine mammals and seabirds. They do pretty much as they like and we're damned fools if we don't heed their warning.
Posted by The Mound of Sound at 12:32 PM

Yes, as a famous father once said" "Fish swim". And birds fly. And the tundra burns. The Arctic melts. Seas rise.

This will continue (as you know due to the latency effect of CO2) regardless of the mitigations efforts that might get going.

Our real dilemma is how we cope with this:
A dystopian, capitalist race to the bottom or a collective run for the life rafts?

This is why I don't agree with the silly meme developing here about the new gov't is just as bad as the last one.

We have a higher chance of finding a successful, collective retreat stategy under a Trudeau (or a Corbyn or a Saunders) than under a Harper or a Trump.


Rather bold statements, NPoV, now why don't you come up with some facts on how Trudeau is putting Canada on a different path from Harper's as well as in what ways he's following Harper's course. No one, not even me, is claiming the Liberal government is "just as bad" as Harper's. You may need to brush up on your reading comprehension. It is, however, pursuing a number of the previous regime's policies whether you like to acknowledge that or not.

Know this. There will be no "successful, collective retreat strategy" that you yearn for so long as we are left to bear the fetters of neoliberalism. Please show me why you believe JT has the inclination to break with neoliberalism much less the resolve to introduce the measures that would be necessary.

I'm sure Justin would like world peace and an end to global hunger but so does every contestant in the Miss America contest. Happy thoughts and dreamy aspirations won't save our bacon.

And then here is poor old Newfoundland that no one on mainland Canada gives a fart about. What do you think is happening to the Fishery there due to Climate Change?