Nobody is sure what this is about but the German government is urging residents to stockpile food and water - Hamsterkaufe - in the event of a national emergency.

Citizens are advised to store enough food to last them 10 days, because initially a disaster might put national emergency services beyond reach.

Five days' water - two litres (half a gallon) per person daily - is advised.

The document said "an attack on German territory, requiring conventional defence of the nation, is unlikely". But, it said, a major security threat to the nation in future could not be ruled out, so civil defence measures were necessary.

The Beebs is reporting that Germany is also toying with reinstating a draft, conscription. The idea is to train young Germans to aid the army in times of national disaster. One German newspaper had this response: 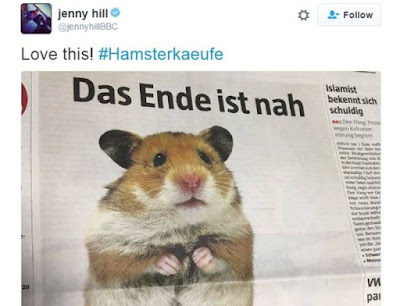 Hopefully this is just prudence. We should all be able to look after ourselves for a few days. Things happen.

However, the BBC report makes one wonder if the German government knows something . . .


That was my impression. Perhaps they have some intelligence on a plan to attack a water utility, that sort of thing.

The good thing is that it's no major inconvenience. We regularly get earthquake preparedness notices to remind us to keep a good stock of dried and tinned food, beverages, plenty of water, batteries, first aid supplies, etc. I've got all that plus plenty of gear for fishing, hunting, shellfish harvesting, that sort of thing. There are two clear mountain streams in the area plus a friend has a well tapped into an underground river. However from my experience as an urban dweller I know that there are plenty in our cities who have little readiness.

Isn't there always a possibility of an attack on Germany Mound? So why the warning for German citizens to stockpile goods for 10 days and why now?

Maybe as you say, the German government knows something. Merkel is also calling on residents with Turkish roots to be loyal to Germany. I wonder if there's a connection. I don't know of course. Just thinking out loud.

I would think most anyplace in western Europe is susceptible to terrorism these days, Pamela. It can be a matter of casting bones and reading entrails to get at why this warning, why now.

A military draft is always a means to employ (cheaply) a lot of young men who would otherwise get in trouble. I wonder why it isn't more common.