NYT Magazine - One Issue, One Issue 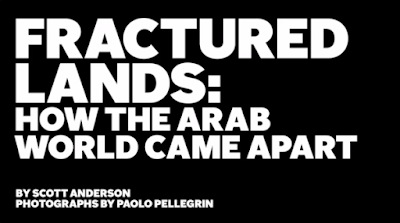 It's a first for the New York Times magazine. An entire issue devoted to just one story - how the Bush/Cheney/Blair invasion of Iraq proved to be the undoing of the Arab world in the years that followed.

"More than a decade of war, terror and revolution has left a trail of ruin in the Arab world. This is the story of how a region came apart, seen through the eyes of six people whose lives were changed forever."

"This is a story unlike any we have previously published. It is much longer than the typical New York Times Magazine feature story; in print, it occupies an entire issue. The product of some 18 months of reporting, it tells the story of the catastrophe that has fractured the Arab world since the invasion of Iraq 13 years ago, leading to the rise of ISIS and the global refugee crisis. The geography of this catastrophe is broad and its causes are many, but its consequences — war and uncertainty throughout the world — are familiar to us all.

"It is unprecedented for us to focus so much energy and attention on a single story, and to ask our readers to do the same. We would not do so were we not convinced that what follows is one of the most clear-eyed, powerful and human explanations of what has gone wrong in this region that you will ever read."
Posted by The Mound of Sound at 6:19 PM

Folks like myself would be bored to tears reading this. It is only be an expose for the folks that will never read it.
Preaching to the converted in giant echo chambers.
(And how quaint coming from ... "The NY Times" ... the modern American version of Pravda.)

Oh, and now the the ME is fixed up so nice, let's 'pivot' to Asia:
Poke the Russian Bear (who was so inconsiderate to put Russia's borders so close to the new NATO bases) and
Challenge China for protecting its historic sea-lane access.

I wonder if Judith Miller will get an honourable mention.


Thanks for the laugh, BY.