Hoist on His Own Orange Petard


Poor old Donald Trump just exploded in his own face. He is, as Shakespeare would say, hoist on his own petard.

A bit of history. A petard was the original shaped charge device. It was a bell-shaped explosive that, when pressed against a fortified door and ignited, would blow a hole clean through it. However, if the petardier wasn't careful, it could explode in his face and he'd be hoist on his own petard. See dandy depiction below: 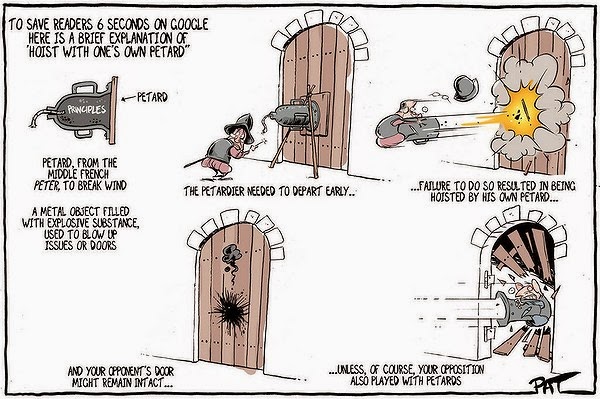 So, what does all this have to do with the Orange Bloat? Well, plenty. Early on, Donny Loudmouth got a lot of support by promising, once in the White House, he'd expel the roughly 12-million illegal aliens living in America. And then he promised to build a wall to keep them from coming back. And didn't the White Trash eat that shit up.

Now Dumbo is backtracking. Apparently he saw how his numbers in a certain essential ethnic community are tanking. So now he's only going to deport those who have committed crimes while in the Promised Land. The rest, says his Beneficence, can stay.

Oooh, not so fast. Trump White Trasher in Chief, Sarah Palin, doesn't like that kind of lefty talk. She's warned Trump, via the Wall Street Journal, that Bloato's support will just erode away if he abandons his core promises -  i.e. if he fails to make America great again for angry white folks with marginal reproductive standards. 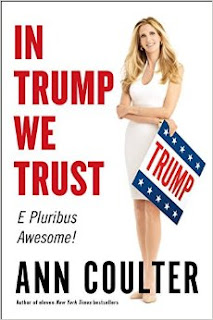 And if Sarah has her knickers in a bunch, that's nothing compared to the fury of another Trump backer, Ann Coulter. Just this week, Coulter's latest book, "In Trump We Trust," hit the bookshelves. Now she's barking mad over Trump's betrayal. And Annie's not alone. Some are saying Trump just threw away his last chance at winning in November.

“Trump probably just threw away his only remaining chance to win in November with Wednesday’s Jeb Bush impersonation,” Mark Krikorian, executive director of the conservative Center for Immigration Studies, wrote in the National Review. “Many of the voters who stuck with him through his various antics will start drifting away.”

Now I'm sure that Ann Coulter, being a lady of high and resolute principle, will have already been on to her publisher with directions to have every copy of her new book pulped forthwith. Nah.
Posted by The Mound of Sound at 9:39 AM

I'm sure Donald's not the first guy to go soft on Ann.

I love it when the right disappoints itself.