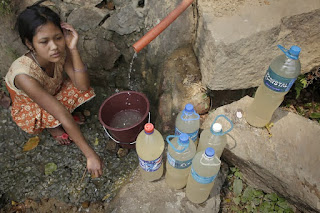 The Walkerton tragedy is revisited in the environmental section of today's Guardian. Hard to imagine it was sixteen years ago that negligence by the Ontario town's utilities manager, Stan Koebel, and his brother Frank, the water foreman, resulted in the lethal contamination of the town's well with, well, cattle poop. Before it was over five were dead and fully half of the town's 5,000 population fell seriously ill.

This is World Water Week and the article reminds us that, around the world, water quality and supply are in serious decline.

Walkerton was one of Canada’s worst-ever pollution incidents but there are hundreds of similar incidents every year around the world, albeit mostly less serious, says Prof [Joan] Rose, who is laboratory director in water research at Michigan State University.

Most come from people drinking water contaminated with sewage, she says. “In the US there are 12-18m cases of human water-borne diseases a year. In developing countries it is possible that one in three hospital cases may be due to contamination of water. We do not know exactly how bad it is but 1.5 billion people do not have access to adequate sewage treatment.”

“We have started to decrease mortality for waterborne diseases but the big problem now is morbidity [disease-related]. People are getting more sick. We are now more polluted than we have ever been”.

“There are 7 billion people and most of their waste is going into water. The water quality of lakes, rivers and coastal shorelines around the world is degrading at an alarming rate. There has been a great acceleration since the 1950s of human and animal populations, water withdrawals, pesticide and fertiliser use. But at the same time there has been a deceleration, or shrinkage, in wetlands,” says Rose.

“We are changing our lands. Land is the source of contamination, but climate is the driver [of contamination]. We know that the intensity of rainfall, storms and droughts is changing. More than 50% of community waterborne illness events in the US each year are associated with extreme rain.”

When it rains heavily or floods, pathogens like Leptospira, hepatitis, norovirus and cryptosporidium are all significant, she says. “There is a direct link between water pollution, certain food-borne disease outbreaks and warmer oceans. Temperature, precipitation, humidity and flooding are all factors in contamination of water and food systems by pathogens. Many developing nations suffer terribly from illnesses caused by lack of sewage treatment facilities which are exasperated by climate.”

Meanwhile, sewage contains well over 100 different viruses. Newly emerging viruses such as Cycloviruses, which are causing neurological problems in children in Asia, are also emerging in sewage and are spreading.

“Pollution is spreading to every part of the world. Everywhere is now under huge new attack from viruses and pathogens,” she says.

Interesting comment .
Poor Government decisions can take many years to be rectified.
Whoever takes the reins from the Clark Government in BC is in for one hell of a ride.
The sad thing is that they will have to make tough unpopular decisions that will eventually drive them from power thus putting the perpetrators back in the drivers seat!

Mound, Walkerton remains one of the first examples of how poor public policy based upon neoliberal thought (reduced government, privatization of public resources, etc) directly and negatively effects citizens. Walkerton was a completely preventable crisis and occurred because a system of oversight was altered to "reduce costs to taxpayers" by privatizing certain services without fully assessing the risks. Many politicians seem to count on their changes having no negative effects that can be linked back to them. This was the first time (to my knowledge) that the horrific effects of a policy change could be linked directly to the sitting government. Harris only indirectly payed for his decision. It will be interesting to see if Governor Snider of Michigan will be held accountable for the horrific water decisions made for the city of Flint. Only when politicians are held significantly responsible for the effects of their decisions will this end!