Who Knew? The Anthropocene Is Here. It Arrived in 1950. 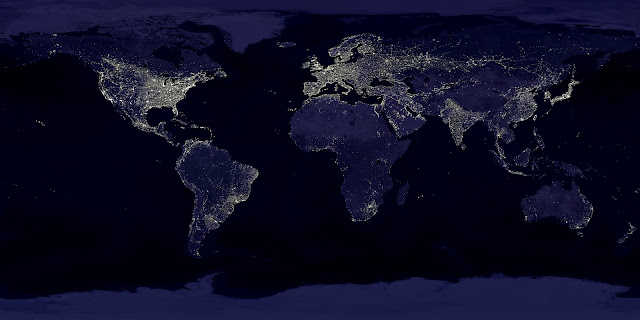 The results are in. After extensive research and debate a team of scientists has concluded that Earth has moved into a new geological epoch, the Anthropocene, and they've backdated its arrival to 1950.

This is the first geological epoch triggered by a lifeform and it turns out that was just one of countless thousands of species. It was us, you and me and the folks who came before us. That's why it's called the Anthropocene, because it's man-made.

The previous geological Epoch, the Holocene, lasted a mere 12,000 years. Before that, epochs lasted from 1.5 to 20 million years at a stretch. The Holocene, which I like to think of as the 'Heaven on Earth' epoch featured a relatively gentle climate perfectly suited to things such as the development of human civilization which, not surprisingly, it did. Then, not content with a good thing, we went ahead and rubbished it.

To define a new geological epoch, a signal must be found that occurs globally and will be incorporated into deposits in the future geological record. For example, the extinction of the dinosaurs 66m years ago at the end of the Cretaceous epoch is defined by a “golden spike” in sediments around the world of the metal iridium, which was dispersed from the meteorite that collided with Earth to end the dinosaur age.

For the Anthropocene, the best candidate for such a golden spike are radioactive elements from nuclear bomb tests, which were blown into the stratosphere before settling down to Earth. “The radionuclides are probably the sharpest – they really come on with a bang,” said [professor Jan Zalasiewicz, chair of the Working Group on the Anthropocene]. “But we are spoiled for choice. There are so many signals.”

Other spikes being considered as evidence of the onset of the Anthropocene include the tough, unburned carbon spheres emitted by power stations. “The Earth has been smoked, with signals very clearly around the world in the mid-20th century,” said Zalasiewicz.

Other candidates include plastic pollution, aluminium and concrete particles, and high levels of nitrogen and phosphate in soils, derived from artificial fertilisers. Although the world is currently seeing only the sixth mass extinction of species in the 700m-year history of complex life on Earth, this is unlikely to provide a useful golden spike as the animals are by definition very rare and rarely dispersed worldwide.

In contrast, some species have with human help spread rapidly across the world. The domestic chicken is a serious contender to be a fossil that defines the Anthropocene for future geologists. “Since the mid-20th century, it has become the world’s most common bird. It has been fossilised in thousands of landfill sites and on street corners around the world,” said Zalasiewicz. “It is is also a much bigger bird with a different skeleton than its prewar ancestor.”

...The term Anthropocene was coined only in 2000, by the Nobel prize-winning scientist Paul Crutzen, who believes the name change is overdue. He said in 2011: “This name change stresses the enormity of humanity’s responsibility as stewards of the Earth.” Crutzen also identified in 2007 what he called the “great acceleration” of human impacts on the planet from the mid-20th century.


...Prof Chris Rapley, a climate scientist at University College London and former director of the Science Museum in London said: “The Anthropocene marks a new period in which our collective activities dominate the planetary machinery.

“Since the planet is our life support system – we are essentially the crew of a largish spaceship – interference with its functioning at this level and on this scale is highly significant. If you or I were crew on a smaller spacecraft, it would be unthinkable to interfere with the systems that provide us with air, water, fodder and climate control. But the shift into the Anthropocene tells us that we are playing with fire, a potentially reckless mode of behaviour which we are likely to come to regret unless we get a grip on the situation.”

A terrific scene which supposedly caught the spirit of a generation, Mound. In retrospect, it looks like we sold out.

"...we are playing with fire, a potentially reckless mode of behaviour which we are likely to come to regret unless we get a grip on the situation.”

I think we have passed the point of no return for civilisation in its current form. But there's a party up at my house tonight. Everyone's invited.

For my entire adult life my society has proceeded on the basis of "because we can" without pausing to question whether we should. We give scant attention to merits, values or pitfalls. Instead we move on, discarding the past and getting it out of our sight in landfills and recycling yards.

When you visualize Earth as it is - Spaceship Earth, our one and only biosphere - then it becomes jarringly clear that we've been acting like madmen within our own asylum.

Now it seems that a great many of us will have to endure misery and premature die offs. Lovelock believes that, by the end of this century, mankind's population will be reduced to a few hundred million. Astonishing and yet our prime minister travels to Beijing to hype trade as he primes the pump for perpetual growth.

"by the end of this century, mankind's population will be reduced to a few hundred million." That is exactly what needs to happen...give this earth a break. Let's dump religion while we are at it as well.

I've seen solid arguements that the Anthrocene started much sooner then the 1950s, but rather with the being of mass farming and civilization as farming has had a massive global effect, its just that since the 50s things have accessolorated.

There are major enviromental challenges, but every new epoch requires adjustments and cause massive changes, this is no surprise.

I feel confedant that the technologies we need to create a more stablized situation.

For all the Chaos and Change humans cause, I believe we're worth it because we have an extremely important function within the organism that is the earth.

Were not just the brains of the earth, the earth had no need for that abstract thought till now, no more importantly were the gonads of the earth, only humanity could possibly terriform a barren world and make it a living world like earth.

Think of a barren planet in a distant solar system like a massive ova and humanity in space ships are likely cosmic sperm that comes and fertilizes it, so that you end up with another earth like world with fish, plants, mammals, reptiles, ampibians, insects,ect...

The only species that could achieve this is humanity, because it requires advanced technology.