"The Way We've Been Thinking Can't Be Right" 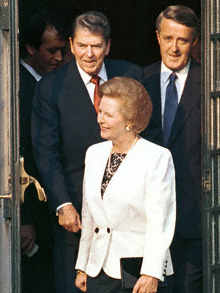 It was some 30-years ago that those shameless libertines - Thatcher, Reagan and Mulroney - hopped into bed with the comely whore, neoliberalism, and we've been getting screwed over ever since.

Their successors are still in bed with neoliberalism. Yeah, that goes for Trudeau too - in spades. But that's not the worst of it. The real creepy part is that , today, they're in bed with a corpse and yet they're still just merrily shagging away.

A corpse, I say? Pay no heed to what I say but you might want to listen to those who are calling out our political necrophiles. People like John Ralston Saul who took neoliberalism's pulse a decade ago and found its once beating heart, globalism, stilled and dead.

Or, if Ralston Saul isn't to your liking, how about Joseph Eugene Stiglitz, economist extraordinaire, Nobel laureate and all?

Since the late 1980s and the so-called Washington Consensus, neoliberalism — essentially the idea that free trade, open markets, privatisation, deregulation, and reductions in government spending designed to increase the role of the private sector are the best ways to boost growth — has dominated the thinking of the world's biggest economies and international organisations like the International Monetary Fund and the World Bank.

The policies of Ronald Reagan and Clinton in the US and Margaret Thatcher in the UK are often held up as the gold standard of neoliberalism at work, while in recent years in Britain George Osborne and David Cameron's economic policies continued the neoliberal tradition.

Since the 2008 financial crisis, however, there has been a groundswell of opinion in both economic and political circles to suggest that the neoliberal consensus may not be the right way forward for the world. In the past few years, with growth low and inequality rampant, that groundswell has gained traction.

Stiglitz, who won a Nobel Memorial Prize in economics in 2001 for his work on information asymmetry, has been one of neoliberalism's biggest critics in recent years, and he says the "neoliberal euphoria" that has gripped the world since the 1980s is now gone.

"We've gone from a neoliberal euphoria that 'markets work well almost all the time' and all we need to do is keep governments on course, to 'markets don't work' and the debate is now about how we get governments to function in ways that can alleviate this," he said.

In other words, Stiglitz says: "Neoliberalism is dead in both developing and developed countries."

Stiglitz is not alone in his belief that neoliberalism has its problems, though his argument that the consensus is "dead" is somewhat more forthright than those of many others. In a blog post in May, three economists from the IMF — long one of the greatest champions of the neoliberal consensus — questioned the efficacy of some aspects of it, particularly when it comes to the creation of inequality.

..."The increase in inequality engendered by financial openness and austerity might itself undercut growth, the very thing that the neoliberal agenda is intent on boosting," Jonathan Ostry, Prakash Loungani, and Davide Furceri argued. "There is now strong evidence that inequality can significantly lower both the level and the durability of growth."

"There are a lot of people thinking the same thing at this point, that basically some aspects of the neoliberal agenda probably need a rethink," [Jonathan, Ottawa born son of Sylvia and Bernard] Ostry told the Financial Times on the day the blog was published, adding: "The crisis said: 'The way we've been thinking can't be right.'"

We are not thinking right, indeed. The evidence is all around us, inescapable. Yet not one of our political leaders, Trudeau included, has thought about slipping out of that bed and maybe taking a long, hot shower. Nope, it's their turn, and they've got some more shagging to do.

And there's the problem. Three decades of hard-thrusting neoliberalism has rendered statesmanship and leaders of vision, redundant and worthless.  The political process, thanks to globalism, has been so neutered as to tolerate only technocrats like Harper and Trudeau. The way they're thinking can't be right. It isn't.
Posted by The Mound of Sound at 8:51 AM

The Friedmanian neoclassical/neoliberal era will come to an end one way or another: by means of action on behalf of the people, or the collapse of civilization into WW3. Like the 1930s, when the people rose up against the robber barons and ushered in a New Deal that created modern living standards, a New Deal revival is the one and only hope that humanity has left. (The New Deal progressive era should never have come to an end in the first place.)

The biggest problem is that modern convenience has turned the West into an aggregate of cowards too easily manipulated by the establishment pseudo news media. The centrists fiddle while civilization burns. The progressive left is taking to the streets with a New Deal agenda. The lizard-brained right has been incited into its own kind of revolution (of course, largely senseless) with xenophobia and nationalism.

Technocracy is evidence-based. Friedmanian looternomics is not remotely a social science. It's an anti-evidence, agenda-driven pretense of technocracy filled with painfully obvious financial conflicts of interest.


I suspect you're right, Anon. We are proving just too cowardly to come to grips with the challenges that confront us even though the outcomes from doing nothing tend to be disastrous.

It takes time to stop one system and install another. In this case, reinstall an older one. Let's consider US politics.
After Roosevelt ushered in a new era in the USA with the New Deal, it took thirty-six years for the old lassie-faire/neo-liberals to finally elect one of their own in Richard Nixon, who began the dismantlement of the New Deal and laid the groundwork for neo-liberalism, and twelve years in-between then, for them to elect Ronald Reagan, who began the construction of the church of neo-liberalism in earnest.
Only now, thirty-six years after Reagan's election, have progressives even had a shot of electing an actual progressive to campaign to win the White House. And, to put it bluntly, they failed.
There's still too much opposition for them to overcome. Now, they need to work overtime to even have a shot in the next election cycle to finally elect their own candidate, but that might not be for another four to eight years, depending on whether Clinton wins the coming election.
And listening in to the conversations being had in the USA, there's no conversation about doing what's needed. The dialogue right now is they need to support Clinton over Trump, because Trump's dangerous. It should really be, both Clinton and Trump are dangerous, and both should be opposed.
Progressives, right now, should be laying the groundwork for them to easily win the next Democratic primary, and they should be working to elect their own to various sectors of government. Pulling down, and pulling out the neo-liberals from the Democratic Party. They can't be spending time and energy working to get Clinton elected. It's not in their best interest. They need to oppose both her and Trump, equally.
Otherwise, the next cycle will simply follow the same script. They'll get close, but win nothing.
They need to stand against neo-liberalism in its entirety. They don't have the luxury of picking and choosing. Not anymore.
In the meanwhile, we'll continue to suffer the consequences of climate change. The earth will continue to shift under our feet. Tens and hundreds of thousands, in Canada and the USA alone, ever year, will continue to have to flee their homes from the mere externalities of climate change, such as flooding and wild fires. World wide, such will be magnified by ten or a hundred. And every day that passes, the percentages inch ever upward. And then one day, we'll hit a major tipping point, and then....
When one thinks about it, really thinks about it, there are mass graves just littering the world. Anywhere in the world where there's a community, there's the decent possibility of there being a mass grave nearby. Some populated, heh, by war, but most from illness. Tends of millions of people, dying close to together. Death running through, scything people down left and right and centre.
There's little we can do to mitigate what's coming, honestly. But we should still be doing that little bit. And we're not even doing it.
May we live in interesting times? We already are. And they become more and more so, every day.

Yes, American progressives have much work to do, Troy, but so do we and I'm not hearing that conversation on Parliament Hill or among our political parties. It surely must begin by recovering our national sovereignty surrendered as a side affect of globalism. That means recovering control of our markets. Yes this entails reinstating some elements of protectionism but globalism has shown to devastating effect the consequences of total surrender.

It's odd how we take our current systems as somehow immutable forces of nature. A GDP growth model economy, for example, is a creature of the post-war world. Yet we still cling to it as gospel, ignoring the irreconcilability of perpetual, exponential growth and a finite, overpopulated world.

I fear we're already being overtaken on too many fronts to see our way out of this mess. There is a way but only one way. We have to bring ourselves into harmony with nature. That would mean curbing our overpopulation, slashing our consumption (especially the resource-gluttonous West) and promptly decarbonizing both our societies and our economy. That involves what James Lovelock labels "sustainable retreat." It's the process of getting smaller and fairly rapidly so as to recognize the primacy of our environment, Spaceship Earth. I've engaged plenty of people in this idea and they all agree with it until I ask how they would reduce their standard of living by 40% or more. Once confronted with the need for shared sacrifice to achieve the essential outcome they'll have none of it. That bodes ill for the weakest and most vulnerable peoples on Earth.

One of the big lies of neo libertines is the private sector is always better. Thus paying for the imorality of private healthcare, education and especialy liberty. Well maybe Orange is the new black changed some minds. Sadly the Donald not and I dont believe Hilary's changes of heart at all.