Our Rogue Government. Justin and Jody Are Above the Law. 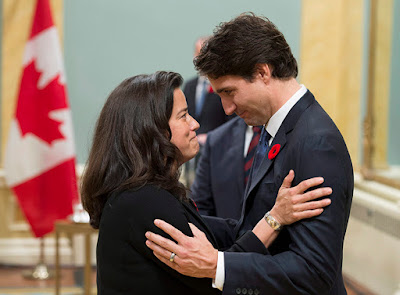 As the Trudeau government sees it, the per curiam decision of the Supreme Court of Canada in the Carter case, the one that establishes the framework of the assisted dying right, is no longer applicable.

Now that there is a new law — which allows assisted dying only for incurably ill adults who are already close to a natural death — the government says those findings are no longer necessarily true.

"The defendant does not admit that these findings remain true today or that they are applicable in the present case," the government argues in a document filed in the Supreme Court of British Columbia.

Among the facts that the government suggests are no longer true are the top court’s findings that:

— Denying assistance in dying for people with grievous and irremediable medical conditions may condemn them to a life of severe and intolerable suffering.

— Such a person faces a "cruel choice": take his or her own life prematurely or suffer until natural death.

— A permissive approach to assisted dying would not put Canada on a "slippery slope" in which disabled and other vulnerable Canadians are pressured to end their lives.

The government’s argument is in response to a court challenge launched by the B.C. Civil Liberties Association and Julia Lamb, a wheelchair−bound 25−year−old who suffers from spinal muscular atrophy, a degenerative disease that she fears will eventually consign her to years of intolerable suffering. Lamb and the BCCLA contend the new law is unconstitutional and not compliant with the Carter decision because it would not allow an assisted death for people, like Lamb, who are suffering but not near death.

In a terse reply to the government’s document, Joseph Arvay, lawyer for the plaintiffs, says the government "is estopped from disputing the factual findings made in Carter ... and to do so is an abuse of process."

Grace Pastine, the BCCLA’s litigation director, said the government is essentially saying, "’We’ve crafted a brand new law and so now this is a brand new issue and you have to re−litigate and re−argue every issue related to physician−assisted dying all over again.’"

The legal fight that culminated in the Carter ruling took four years and cost millions, she noted, adding that the government is creating "a real barrier to justice" by maintaining that battle must be fought all over again.

"If ordinary Canadians and public interest groups and pro−bono lawyers have to recreate the wheel every time they challenge an unconstitutional law, they’re seriously disadvantaged against the bottomless pockets of the federal government," Pastine said in an interview.

Trudeau and justice minister Jody remind us, yet again, of the bad old days of the Harper regime. When it suits them they can be every bit as despicable, just as authoritarian, as the scoundrels they replaced. Just like Harper they see themselves as above the law.
Posted by The Mound of Sound at 11:15 AM

Why have Justin and Jody chosen this awkward stance when they could have simply deferred to the Supreme Court? It makes no sense. Are they both beholden to priests?


They're beholden to something, Toby. As we've seen repeatedly, this is not a government to act on principle, to do the right thing. Opportunism and partisanship are alive and well in the Liberal ranks. Who knows, give them a few years and we might temper our views of Harper's excesses. It must be a bitch for Liberals who thought liberalism and progressivism still dwelt within their party. Most of the faithful, I suspect, really couldn't give a shit for anything that doesn't translate into power.

I was really enthusiastic about Justice Minister Jody and EnviroMin Cathy when they were appointed only to see Dame Catherine turn into a mewling sheep bleating "national unity, national unity" to cover her too rapid retreat and Jody metastasize into a thug. Combine that with a prime minister utterly devoid of the character and traits of the man who made that name great and we have today's Liberal Party of Canada.

I agree with all of your analysis Mound.It's early days but Trudeau's policies have already shown him to be a supporter of speciaL interests. The interest of Canadians mean nothing to him. There is absolutely nothing progressive about him.In fact like Harper, "he likes the power, he doesn't like to govern." In the next 3+ yrs he is going to create policies that will consolidate his power. Punishing people who attend a peaceful protest. Denying visas to people whose ideas the Liberals don't like. The process to control and oppress has already started and it's a much smoother running machine then Harpers.

I won't bore you with what I think he is going to do with Bill C-51, The TTP and The TTIP.
I find it actually painful that he is the son of Pierre Trudeau, because I can't help but see how unlike his father he is in having an independent mind and character and also how unequal intellectually he is to his father.Definitely not like father like son.


The father is a most unflattering mirror to hold up against the son, Pamela.

One was an intellectual, a philosopher, a labour organizer and picket line warrior, who battled a corrupt premier. The other is a school marm. It's like comparing apples to mashed potatoes.

He lacks his father's courage, vision and intellectual integrity. He certainly inherited little of his father's virtue.

You are spot on with these comments. The Justice Minister is, I think, correct that the government doesn't have to follow prescriptively the earlier Supreme court ruling: but she needs to make clear why those rights identified by that ruling ought to be narrowed, as she did with her legislation. All we have heard from Trudeau and Wilson Raybault is they can do this, not why they should do this: why is it necessary for a person to foresee their death to gain coverage under the law? Why should those grievously suffering not have physician assisted death option available? No clear explanation has come from the government: it's all vagueness about "balance".

The government mishandled the process of enacting this law (and not all of that was their fault: since Harper dragged his heels with a deadline approaching). But I suppose the government wouldn't be too shocked, or saddened if their new law is altered by the court. As Toby comments above regarding the Catholic vote, That's political gamesmanship.

The trouble is, of course, that people are genuinely suffering. That's not good gamesmanship.

I am sure that it will be prohibitively expensive to fight this ruling but it will be fought and Trudeau will lose. The only question is, after they lose will the dog and pony show begin again - will they simply introduce another unconstitutional bill and start over?

"All we have heard from Trudeau and Wilson Raybauld is they can do this, not why they should do this"

Actually, Chris, we have heard their justifications. We've heard them over and over again in courtrooms in British Columbia, in Alberta and in Ontario. And each time they've raised their justifications in argument, they've been rejected by our judges first by superior courts, then courts of appeal and finally by the Supreme Court of Canada.

Each time those arguments fail and are swept aside the Trudeau government squirms and contorts the same claims into narrowly different claims. So far their pernicious and cruel sophistry has allowed them to wage lawfare on the afflicted although, as Joe Arvay notes, this is manifestly an abuse of process. How does a court hold the federal government in contempt? Perhaps if Justice Minister Jody got banged up in the Greybar Hotel for a couple of weeks it would do her a bit of good. I certainly think it's worth a try.


Kirby, the Supreme Court of Canada in Carter allowed special costs against the government. In essence, the feds had to pay Ms. Carter's entire legal bill - fees and disbursements. Perhaps it's time for punitive damages. Make the feds bleed a bit, infuriate the "taxpayer" crowd, shame Trudeau and his government in the eyes of all right thinking Canadians. The court has to put an end to this ongoing abuse of process.

5:20 PM...When you use such terms as "school marm" you are degrading women who are teachers and were teachers. Did you not go to school? The treatment and the inequality of women begins with such comments as yours. Don't prate on about this is your blog and you can do what you like. You will sound like Donald Trump.