Can We Undo Our Colonial Tragedy? 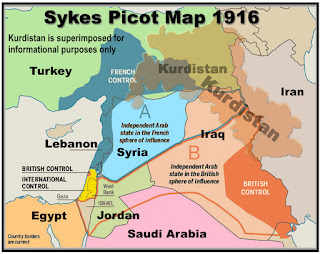 Africa, the Middle East and South Asia are the worst afflicted. Go to the maps, find all the borders. The straight lines are the tell tales. That's the fingerprint of European colonialism from the 19th and 20th centuries.

Whether it's the handiwork of Sykes and Picot or Durand or any of the other European planners,  those lines were drawn to demark spheres of European control in distant lands and they were invariably drawn with scant regard for ethnic, religious, even tribal realities. Some people, such as the Kurds, saw their ancient homeland carved up and divided among a half dozen or more "states" from Iraq and Iran to Syria and Turkey, Armenia and Azerbaijan. In the process the Kurdish land was wiped from the maps. We know what Saddam did to Iraq's Kurds. We know what Turkey has done to them. We know what has befallen Syria's Kurds. We should know. We, the West, were instrumental in their fate.

Damaging as those Euro-centric borders have been for the locals, even bigger problems loom.

A new study, published in the Proceedings of the National Academy of Sciences, looks deeply at the link between ethnic division, violence, and natural disaster data. It found that between 1980 and 2010, 25% of conflict outbreaks in "ethnically highly fractionalized countries" coincided with climate calamities, like drought, or heat wave. Globally, armed conflict and climate disasters only coincided 9% of the time.

Experts are usually careful to avoid saying that climate factors directly leads to war—usually it is described as an important exacerbating or escalating factor, and even that can be controversial or hard to prove. But as the study’s authors, based in Germany and Sweden, note: "Ethnic divides might serve as predetermined conflict lines in case of rapidly emerging societal tensions from disruptive events like natural disasters."

...this is bad news in some of the world’s most fragile places—which happen to be where climate change is expected to hit hard. Of the 33 countries predicted to experience "extreme water stress" by 2040, 14 of them are in the Middle East. Security experts, the authors write, are going to have to pay closer attention to these dynamics.

Can we undo our colonial tragedy? Probably not. No country, especially not Turkey, Syria or Iraq, would tolerate a reconstructed Kurdistan.  They consider the Kurdish ancestral land extinguished, subsumed.  The same thinking applies to the mish-mash of Sunni and Shiite states.

Some, such as Peter Galbraith, think the only future for Iraq lies in its dismemberment into a Shiite state in the south, a Sunni state in the middle and a Kurdish state in the north but that hardly seems feasible with endless conflict tearing at that region.

And so these mangled nations shall remain primed for climate change-driven ethnic, tribal and sectarian violence that could resemble the butchery we saw in Rwanda.
Posted by The Mound of Sound at 1:56 PM

The Kurds have a better claim than the Jews. The Jews have spent most of their existence in the Diaspora. According to their Bible they originally conquered the "Promised Land." (The actual history is a lot more complex.) But they were constantly at war with a number of neighboring Semitic tribes.

The Babylonians (of present-day Iraq) exiled the Jews in 586 BCE (destroying their first Temple.) They were allowed to return when the Persians came to power (of present-day Iran; at the time Judaism was mixed with Persian Zoroastrianism producing a bunch of mystical sects; that eventually produced Christianity: a Jewish heresy rejected by the Jews but exported via Saul, the industrious cult leader, throughout the Roman world.)

In the 5th century BCE, Herodotus referred to the entire region as Palestine. That was the name given to the Roman province of Judea after the second Jewish revolt (132-135 CE; the second Temple was destroyed during the first revolt of 66-70 CE which the hated King Herod had largely restored; he is actually admired by historians for the impressive public works he built.)

For the next couple of millennia a small remnant of Jews lived in relative peace with other Semitic descendants (Samaritans, Palestinians, whomever.) The Muslims arose in the 7th century carving away the Middle East, North Africa and Spain from the Eastern Christian Roman Empire. They carried on the development of civilization where the Romans left off: math, science, technology, incredible architectural works, etc. during the European Dark Ages after the Western European Empire collapsed in 476 CE. In Europe the Jews were brutally persecuted for 1600 years culminating in the Holocaust. (The Roman Empire became Christian through Constantine around 325 CE; hence the tensions with "Judas.")

Then the botched creation of the state of Israel which was one act of geopolitical corruption that has produced the present tensions between the (once) Christian West and Islam. That along with the self-serving corruption in drawing international borders after Europeans plunged the world into a second global war. That along with the de facto invasion of Iran in 1953 by the US and the UK (which, incomprehensibly, they doubled down on officially invading Iraq 50 years later.)

Long story short: we can't allow corrupt establishment politicians to make geopolitical decisions. Somehow, someway we must come up with better, or this little concentration-camp civilization these Masters of the Universe of ours have cooked up is going to collapse and the biosphere along with it. (Perhaps we should consider the idea that all civilizations collapse before this one does. Because this one will be the grand finale of barbarian Hominini corruption and incompetence: the MOAFUS.)

There is something very, very wrong in the world Mound. Droughts, floods and grossly unseasonal temperatures accompanied by mind blowing poverty where children literally starve to death. This poverty and death takes place in the developing world. Then their is South America where these countries are constantly fighting against US coups and or invasions where there wealth is expropiated and they are controlled by massive violence, usually by a dictator placed by the US.

And what is the west really doing? The supposed wealthy, modern countries. Give me a break! The US and its imperial allies particularly England and France exploit and control politically and economically, including the wealth of Africa, South America, the Middle East and certainly parts of Eastern Europe with countries like Ukraine.The citizens of these countries live under unbearable suffering.

The violence that these civilians endure and the complete destruction of their homes, towns, cities and literally their very lives destroyed by the bombs dropped by the US/NATO, Israel and Saudi Arabia in their perpetual wars. The citizens of these war mongering countries seem completely indifferent to their governments slaughter and murder of millions of people, especially the vulnerable of the world.

Let someone even someone as off the wall as Trump say in a moment of clarity that we can get along with Russia and they will pull out all the stops, the government , the democrats and republicans, the MSM, the CIA,the military and the corporate elite along with any two bit war monger to stop him or better still to obliturate him. Trump is a buffoon, but anyone with half a brain can see the integrated concerted effort in their constant barrage and non-stop attacks of him have nothing to do with his buffoonery.He is a wild card. They don't know if he becomes president if he'll continue with the present wars and the ones not yet revealed but planned for the future.

Those who want war are the ones in charge and God help anyone who challenges them by wanting peace.The wholesale destruction of the earth and its most vulnerable people by climate change, wars, and Neoliberal colonialism , will destroy the world.

The time to stop this insane apocalypse is running out.

The best we in the West can do, really, is to stop making things worse. Stop funding terrorist groups, and stop arming dictators.

Not a great track record, really. And when you consider the slimy creatures (like Negroponte) slithering up to Clinton whispering in her ear his advice (which is exactly what she wants to hear), it then becomes hard to believe anything will get better on our end anytime soon.

Israel is here to stay.
Love them or hate them they are resoursfull enough to survive even without USA help.
I don't think we give enough 'credit' to those in the west that support Israel; that is those that believe in the end times , the christian fudementalists.
Creating instability around israel gives them security all be it in a twisted way.


I suppose I see things much as Troy does. It's FUBAR with the emphasis on B for "beyond." It's bad enough that we created these back-alley nation states with their "fractured ethnicity" but now we've thrown gasoline on the fires in the form of anthropogenic climate change.

These are, of course, "unintended" outcomes, our favourite term of self-absolution. Yet much of what is befalling the most vulnerable was and is quite foreseeable. In our criminal law a person is deemed to have intended the logical and foreseeable consequences of his act. And so we are rightly held culpable for this mess. What we need to consider is that the people who will be on the receiving end know very well who is to blame for their affliction.

The Americas were carved up to suite Europe.
After two or three hundred years they have somewhat settled down.
Maybe the ME will remake itself as it sees fit?
We all come from somewhere else and it has not always been an easy ride!

It seems some races can be treated with kindness and respect and given back their dignity. What is sickening is when these same countries do exactly the same thing to others that was done to them. Israel anyone?

Then there is the case of gender. How many women have made war? Perhaps women should be running the world. Oh my heavens!

Yes but, at least in North America, the Euros settled and occupied the territories they established. It was also easier, perhaps, because the original peoples were aboriginal unlike the more complicated ethnicities of the Middle East in the 19th century. Whether in the ME or Africa, Europeans had a different agenda than what prevailed in the Americas. It would be interesting to read some comparative analysis of how European colonization differed by continent.

@ Anon 3:38 - you mean as in Golda Meir, Margaret Thatcher, Indira Gandhi, or, gulp, Hillary? I think when it comes to waging war, women, given the opportunity, aren't that much different than men. How terribly sexist of you !!!