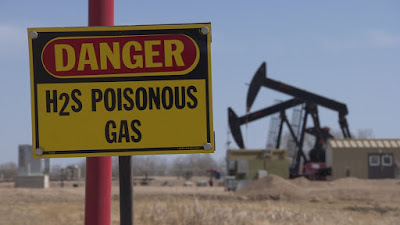 There are some 1,500 abandoned oil and gas wells in urban areas of Alberta. One in ten is leaking methane at dangerous levels. The Tyee's energy scribe, Andrew Nikiforuk, got his hands on a unpublished study by - who else - Alberta's industry-compliant energy regulator.

Six of them were leaking methane at more than 10,000 parts per million (ppm), a level deemed “life threatening” by Alberta Health.

According to a 2015 Alberta Health document titled “Methane from Leaking Abandoned Wells: Health and Safety Concerns” also obtained by The Tyee, leaks of 1,000 ppm could result in neurological effects. Leaks above 10,000 ppm pose explosion risks and should prompt “emergency evacuation,” the Alberta Health report said.


The Alberta government has not released the health and safety methane document. When The Tyee asked for a copy two months ago, ministry press secretary Laura Ehrkamp said officials couldn’t find it.

The methane leakage study was prompted by new regulations in 2014 that directed industry to locate and test abandoned wells that may pose a risk to communities.

It found that six wells that exceeded the emergency evacuation threshold of 10,000 ppm were outside buildings. Three other hazardous wells had “methane leakage inside buildings.”

In addition the report noted another 53 abandoned wells out of the 1,500 that had been identified as “higher risk” because of sour gas or acid content. “Licensees were directed to locate and test these wells,” the report says. There was no information on the results.

Although leaking methane from wells often travels with well-known public health hazards such as benzene, toluene, xylene and hydrogen sulfide (a potent neurotoxin), the AER study only measured methane.

Alberta's NDP premier, Rachel Notley, and her government can't even protect her own citizens and she wonders why coastal British Columbians give her short shrift whenever she bleats "trust us." We have no reason to trust her or her province's energy industry or, for that matter, our feckless prime minister. Wherever this industry goes it leaves bad debts to be made good from the public purse, bankruptcies of convenience and environmental nightmares. And then Notley has the audacity to tell coastal British Columbians that it's not our coast. Shove it Rachel, shove it all the way.

Anyong. Remember when I mentioned this to you a month or so back? Thanks for researching it and writing about it as no one will do it in this province. Cheers.

Yes, this topic was in the news, what, six or twelve months ago. Apparently the past governments of Alberta never signed contracts requiring oil and gas extractors to clean up their shit behind them. Typical. Privatize profits, socialize the cleanups.

Speaking of which, just a few entries above this on Progressive Bloggers today is a deSmogBlog article on who's going to pay for tarsands tailing ponds cleanup. I should have thought the answer was obvious - you and me. Apparently the cost to clean up the existing mess is more than the value of almost all the dilbit ever produced. Man is a smart animal, ain't he? We let people mesmerize us into raping the land, make a big profit, and then bugger it, those extractors are off to ruin somewhere else for the promise of a few jobs to blinded pols desperate for a lift in the local polls. Sickening.

.. the tar sands and fracking mythologies are cross border & delivered by stork
The problems, the complications, the danger.. are almost beyond our imaginations.
We bulldoze the Amazon Basin, kill off the Great Barrier Reef
Melt the Greenland glaciers and Antarctica ..

Meanwhile, we bomb Syria, screw Palestine
and fall all over ourselves re the color of The Queen's summer bonnet
or the socks of our Prime Minister

Plastic in our oceans ? Cluster bomblets ?
We cannot even feed our world.. but we can poison it.