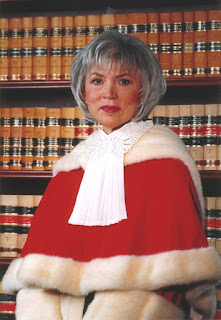 She's done a fine job for the past 17 years as Chief Justice of the Supreme Court of Canada.  That's coming to an end on December 15th when Beverley McLachlin bids the court adieu.


McLachlin advanced collegial relations among Type A judges and lawyers where cliques had often formed, pushing for consensus and clearer statements of Canadian law. Under her administration, backlogs cleared, and the court made leaps in public outreach.

She was the target of Conservative critics for leading a judicially “activist” court that thwarted the will of Parliament, but she always rejected that label, and argued it was elected legislators who tasked judges with implementing the Charter of Rights and Freedoms. The 1982 constitution gave courts the ability to overturn laws that limited rights in an unreasonable and unjustifiable way.

Last fall, in an exclusive interview McLachlin told the Star she felt she still had work to do to integrate an expected new judge. With the arrival of Prime Minister Justin Trudeau’s first appointment, Malcolm Rowe, the bench had a full complement for the past fall, winter and spring session.

I'm deeply grateful to McLachlin for leading the Supreme Court during the Harper decade and, by staying faithful to the Charter of Rights and Freedoms, showing the courage to thwart his excesses.

As for the current prime minister, his office released a statement loaded with the typical gushy words and yet his government still refuses to accept the McLachlin court's per curiam decision in the Carter case.  Deeds, not words, Justin.

Is Martin Lukacs your alter ego?

Out of breath? He has also broken an electoral reform promise, initiated a privatization scheme that is a massive corporate handout, left un-repealed a Tory political spy bill, launched air strikes in Iraq and Syria despite pledging a withdrawal, and inked the largest-ever weapons deal with the brutal, misogynistic Saudi Arabian regime."


There's one thing that distinguishes me from Lukacs. When Trudeau has kept a promise or implemented something progressive I have been quick to credit him for it. Lukacs is in the bag for the NDP and always has been. More than once I have called him out in comments on his Guardian articles.

Gavels are not used in Canadian courts.