The Emerging Consensus - the U.S. Has Chosen to Become a "Has Been." 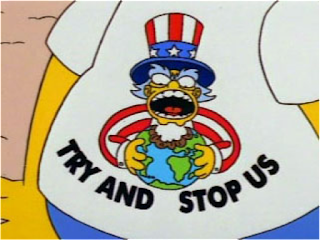 For decades many Americans were fond of chants praising, well, themselves. "We're Number One, We're Number One," or the always popular, "U.S.A., U.S.A., U.S.A." It was a great way to mask the reality that, among the advanced nations, America was usually well down the list on so many things from infant mortality to health care outcomes to domestic violence and murder rates, inequality, incarceration rates and on and on and on.

America's allies tended to stand by bemused at these shabby expressions of American exceptionalism and triumphalism. We knew better but were too polite to call our cousins out on their hyper-patriotic delusions.

We stood, on the sidelines where possible, and watched with some concern as America evolved into today's permanent warfare state. See here, and here, and here. At the same time we saw that war after war, year upon year, decade following decade, this massive military force, completely unlike anything previously known to man, failed to deliver any meaningful victories. The last "wins" were in Grenada and Panama.

It's disconcerting when your team captain breaks a hip. It makes you rethink the situation, re-assess your options. Over the past month Donald Trump has put his nation's allies, America's team, in this very spot.

Even Canada's foreign minister, Christia Freeland, says Canada can no longer rely on the United States in the face of threats from Russian adventurism to Islamist terrorism.

In a major speech setting the table for Wednesday’s release of a new blueprint for Canada’s military, Ms. Freeland did not mention U.S. President Donald Trump’s America First foreign policy, but she said many Americans cast their votes to “shrug off the burden of world leadership.”

“The fact that our friend and ally has come to question the very worth of its mantle of global leadership puts in sharp focus for the rest of us to set our own clear and sovereign course,” she told the House of Commons Tuesday. “To say this is not controversial: it is a fact.”

Freeland's remarks echo what is increasingly being said across the pond in Western Europe and across that bigger pond, in South and Southeast Asia and Asia Pacific.

In a Der Spiegel editorial the august German news magazine notes that Trump has brought America, Europe and the trans-Atlantic consensus to a turning point in history that it describes as "an epochal shift."

The rift with Trump is just the latest in a long string of foreign policy failures that Merkel has suffered during the 12 years of her tenure. Putin's Russia is once again seen as an adversarial power, civil war continues in Ukraine, Turkey is on the path to a dictatorship, the United Kingdom is leaving the European Union, Hungary and Poland are taking a step back, Greece is endangering the euro -- and now even the U.S. is turning into a problem child. Germany is running out of partners. The chancellor should treat the ones that remain with care.
...

In her speech last Sunday in Munich, Merkel at least drew the correct consequences: "We Europeans," she said, "must really take our fate into our own hands." Perhaps she was referring to Trump's demand that Germany boost defense spending. But the European project won't be saved with tanks and warships.

If Angela Merkel really wants to do something to stop the erosion of the EU and to save the Paris Agreement, she must form an axis with French President Emmanuel Macron -- one that is based on personal trust. Macron's proposals for united European financial policy might be ambitious, and they might cost the Germans a lot of money. But the chancellor should embrace them nonetheless. Helmut Kohl invested billions in European unity -- and it has been nothing but beneficial to us Germans.

It's gotten so bad that Trump's minions - Tillerson, Mattis and McMaster - are now racking up frequent flier points circling the globe non-stop to try to persuade an increasingly skeptical world that Trump isn't the complete asshole that they all know he is.

The silver lining is that Trump may have offered America's allies an out, a way to retire from America's Foreign Legion.  The starting point is the Middle East and South Asia where America has started wars it cannot hope to finish. Trump is now trying to cajole NATO allies to go back into Afghanistan. This is a great time to graciously decline. If America wants to fight "forever wars" that's on them. There is much good that can be done elsewhere so why squander our soldiers' lives on such a pathetic military adventure?

We all know that, when confronted by a bully, the only way out is to stand up to him. America is pulling up the drawbridge. Let's find other partners, the reliable kind.

"Greece is endangering the euro -- and now even the U.S. is turning into a problem child. Germany is running out of partners"

Germany deserves no allies after what the Chancellor did to the poor Greeks, it was pure evil, and if anyone endangered the Euro it was their hateful Chancellor Angela Merkel who is worse then Trump.

"Greece is endangering the euro -- and now even the U.S. is turning into a problem child. Germany is running out of partners"

Germany deserves no allies after what the Chancellor did to the poor Greeks, it was pure evil, and if anyone endangered the Euro it was their hateful Chancellor Angela Merkel who is worse then Trump.

U.S.A. would loose #1 status a long time ago without propping the USD as de facto World reserve currency by a naked force...
A..non