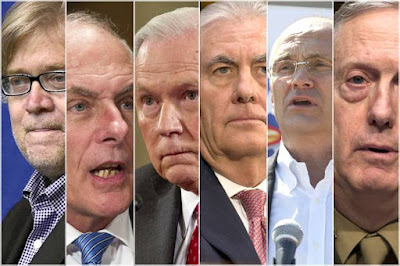 Just how screwed up is the Trump White House?

The morning brief from Foreign Policy illustrates the nightmarish environment that the adults in the Trump administration have to contend with from the likes of Steve Bannon and Stephen Miller to their verbally incontinent commander in chief.

Trump keeps setting diplomatic dumpster fires that defense secretary James Mattis and state secretary Rex Tillerson have to try to put out. Then they have to wait for the next time the Cheeto Benito opens his mouth.  And, while they're busy travelling the world on damage control missions, back at home they're getting subverted by Trump's own, in-house insurgency.

We’re here. We promise. Two top U.S. officials spent the weekend attempting to reassure Asian allies of Washington’s commitment, despite president Trump’s harsh words for friends and scuttling agreements in the region and in Europe. In separate speeches in Singapore and Australia, Defense Secretary Jim Mattis and Secretary of State Rex Tillerson insisted that despite Trump’s “America First” rhetoric, allies should pay more attention to their actions than the president’s words.

“What a crummy world, if we all retreat inside our own borders,” Mattis told regional leaders in Singapore. “Like it or not, we are part of the world.” In Australia on Monday, Tillerson told reporters, "I hope the fact that we are here demonstrates that is certainly not this administration's view or intention to somehow put at arm's length the other important allies and partners in the world.”

State of confusion. Still, allies are worried. "We are still trying to figure out his (Trump's) policy in our region,” Malaysian Defense Minister Hishammuddin Hussein said over the weekend. "I would like to know very clearly what are the true intentions of the new administration." Several countries in the region are forming their own alliances, unsure of what might come next in Trump’s world.

Tough talk for Beijing. Despite Trump’s recent praise for China’s leadership, Mattis slammed Beijing’s construction of bases and man-made islands in the South China Sea, citing “China’s blatant disregard for international law and its contempt for other nations’ interest its effort to dismiss non-adversarial resolution of issues.” He added that the U.S. opposes “militarizing artificial islands and enforcing excessive maritime claims unsupported by international law. We cannot and will not accept unilateral, coercive changes to the status quo.”

Chinese officials shot back at Mattis’ comments, displeased with the criticism.

Tillerson doubled down on Mattis’ comments, saying Washington would not allow China to use its economic power to "buy its way out of other problems, whether it's militarizing islands in the South China Sea or failing to put appropriate pressure on North Korea". In Singapore, regional leaders pressed Washington to continue its freedom of navigation operations in the South China Sea, to keep pressure on China.

Promises, promises, words. But what effect will assurances from Trump’s cabinet officials have when the president remains impulsive, prone to Twitter outbursts that undermine his own policies, and remains close to nationalist advisors like Steve Bannon and Stephen Miller?

The power of that faction was evident during Trump’s coalition-rattling speech at NATO headquarters last month, when Trump belittled European allies and refused to support Article 5, the alliance’s mutual defense agreement. The president’s cabinet had signed off on what they thought was going to be a fence-mending speech praising the alliance, but without warning Trump tossed that speech out and with the support of Bannon and Miller, delivered a blistering address that shocked both allies as well as Mattis, Tillerson, and national security advisor Lt Gen. H.R. McMaster.

Politico’s Susan Glasser writes that the three believed the president would reaffirm Article 5, but when “Trump started talking...the president’s national security team realized their boss had made a decision with major consequences – without consulting or even informing them in advance of the change. ‘They had the right speech and it was cleared through McMaster,’ said a source briefed by National Security Council officials in the immediate aftermath of the NATO meeting. ‘As late as that same morning, it was the right one.’”

Still, McMaster delivered a speech over the weekend saying everything is great, and the president had a successful trip to Europe.

Palace intrigue. White House advisor Steve Bannon's parallel National Security Council has ceased to exist, the Daily Beast reports. Bannon had set up a body he called the Strategic Initiatives Group (SIG) shortly after the Trump administration was sworn in but insiders say the SIG, intended to generate policy ideas, quickly fell prey to a lack of budget and power conflicts between Bannon's Trump's son-in-law and White House advisor Jared Kushner. The demise of the SIG has also left controversial White House advisor Sebastian Gorka with little to do, according to the Beast, with one administration insider saying "He has no discernible or real impact on policy making, period."

Bunker. Secretary of State Rex Tillerson has hunkered down on the seventh floor with access to him tightly controlled by a couple of close aides, according to Politico. Even confidantes such as former Secretary of State Condoleeza Rice have reportedly had difficulty getting in touch with Tillerson, as aides screen his calls even from intimates like Rice. Tillerson has grown especially reliant on two aides, Margaret Peterlin and Brian Hook, both of whom critics say have cut him off from advice and contacts that could help the secretary improve his performance.

And that, kids, is the very picture of executive branch dysfunction. The big problem is that it's incurable because it begins at the very top, with Trump himself. All of this flows from that one individual's dangerously warped psyche.

For better context, read my previous post which details how Boeing and Lockheed learned to exploit Trump's mental vulnerabilities to transform him through ego-stroking from their critic into their backer. The lesson, for America's friends and foes alike, is that Trump can be quite predictably and reliably played. The man is positively Pavlovian. Americans and U.S. allies alike have good cause for concern.

Boeing and Lockheed are only manipulating Trump into doing what he was already planning to do. There's no question that Trump wants him some bright, shiny new Airforce One bling, but he first had to trash whatever the Kenyan Usurper had negotiated. Same with the F-35. He wants to hear that he's doing better than Obama could, but he's never said he plans to kill the F-35.

It's less clear that Trump can be manipulated into doing something he doesn't want to do, such as giving full support to NATO and staying in the Paris agreement. Bashing NATO and Paris were major campaign themes, and he wants to chalk up wins on Bannon's white board.

However, Canadian negotiators may be able to use some of the aircraft companies' tactics in renegotiating NAFTA, since his promise was to negotiate a better deal, same as what he perceives himself doing with Airforce One and the F-35. We'll see what they come up with.