Theresa May plotted to enter Brexit negotiations with the E.U. full of hellfire and fury. Then she buggered up an opportunistic general election, losing the Tories their majority. As if that wasn't bad enough, May bungled the Greenfall tower catastrophe at one point being put to rout by an angry crowd. The Gods, it appears, have it in for Theresa May, prime minister pro tem.

Disasters, some say, come in threes and, sure enough, today begins the Brexit talks to negotiate Britain's withdrawal from the European Union. Here's how The Guardian's Martin Rowson captures the moment: 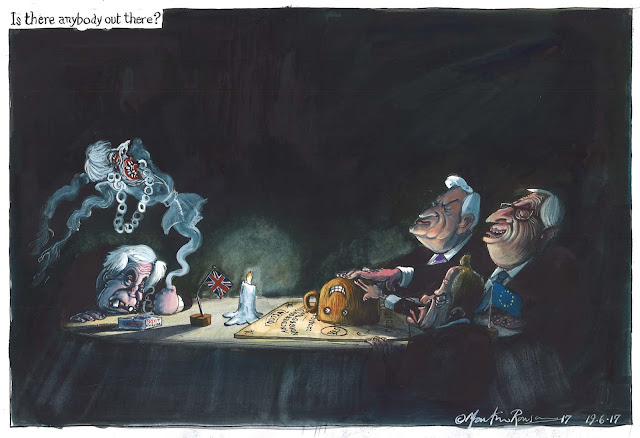 According to Der Spiegel, the E.U. team has suddenly lost their fear of Britain's would-be Iron Lady II.  Some believe the Brexit baby may be stillborn.

Great Britain may be an island, but economically it is the most interconnected country in Europe: The financial center in London, the country's carmakers, what's left of British industry and even the country's infrastructure. France delivers electricity, water sanitation facilities in southern England belong to Germans and large airports such as Heathrow are owned by Spaniards. One quarter of the doctors who keep afloat the NHS -- Britain's comparatively deficient health care system -- come from the Continent.

The promise of Brexit was steeped in ideology from the very beginning, a fairy tale based on dark chauvinism. The Spanish Armada, Napoleon, Hitler and now the Polish plumbers who allegedly push down wages -- when in reality they ensured that, after decades of lukewarmly dripping showers, the country's bathrooms gradually returned to functionality. Brexit was never a particularly good idea. Now, following the most recent election, Brexit is defunct. That, at least, is what a member of Theresa May's cabinet intimated last weekend. "In practical terms, Brexit is dead," an unnamed minister told the Financial Times.

The disintegration of the UK could prove to be a very instructive process for the rest of the world. It's a teachable moment. I mean some good ought to come from it so why not that?

I could very easily build a strong leftist case for Brexit--and I'm not even talking hard left, just not pro-neoliberal-financialist-austerian-globalization. All vaguely left arguments in favour of being in the EU start from the premise that the EU could somehow be made to completely change what it is and how it works; this done, being in the EU would then be a good thing. But none of these arguments raise any plausible mechanisms by which this could be done--and the worst aspects of the EU, like the rule by financiers, the terrible budget constraints, the ways the Euro acts as a straitjacket on member governments and so on, are all deliberately very difficult to reform.

The EU was OK as a standards body on steroids, that harmonized regulations on food and things so trade in genuine goods across borders could work more smoothly. It probably started to suck before the Euro was created, but that was really a point of no return. Supposedly Britain is supposed to be terrified of leaving because they won't be in on the free trade and because the quotation here notes that foreigners own a bunch of their stuff. But Britain doesn't need more trade, it has a huge trade deficit. More trade will just make it bigger. Britain needs import substitution and industrial policies. And yeah, foreigners own a bunch of their stuff--much of it because Conservatives privatized it, and it should be renationalized for the same fire-sale prices it was sold at, and what does that have to do with Brexit one way or another?

Looks like May's crack negotiators are off to a fine start:

British negotiators have capitulated to key European demands for a phased approach to Brexit talks, agreeing to park discussions on free trade until they have thrashed out the cost of the multibillion-euro UK divorce settlement.

Putting a brave face on a concession that may further strengthen the tactical dominance of the EU, the Brexit secretary, David Davis, insisted his initial retreat remained consistent with long-term government strategy.

Sure David, whatever you say.

It's difficult and a bit scary to imagine where this is going now, especially as Anon points out, the Brits have already folded on their cornerstone demand to negotiate some free trade deal in conjunction with unravelling the treaty obligations. London's already nervous financial sector can't have much confidence remaining in the Tories especially after today's events. If the banks and bourses start voting with their feet it will be calamitous for the government and undermine whatever bargaining strength the UK imagines it retains. What if the Tory caucus, already deeply divided over Brexit, shatters? Another quick election would probably be disastrous for the Tories and bring Britain to heel in Brussels.

As soon as it sinks in that they won't be able to browbeat the Brussels crowd they'll start in on the Commonwealth. It will be interesting to see how their colonial arrogance plays out.

Patrick Stewart on the ECHR.

It is quite apparent that the Emperor has no cloths; has not for years.
During my recent trip to the UK there was an undertone of racial intolerance during any discussion of the EU.
On the other hand , in France, the attitude was one of inclusion.
Since the Brits voted for Brexit the EU have become more united, in spirit at least.

Gut feeling.
Brexit will be watered down s to be meaningless.
There is too much money at stake to let it happen.