The Sheer Numbers Are Devastating 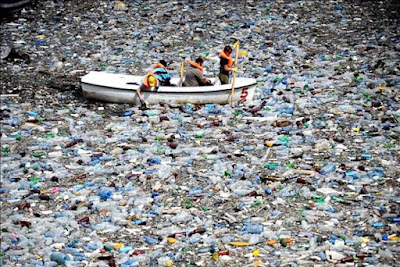 I try to recycle every scrap of plastic that I can. I've kept vaguely current on the state of plastics in our oceans and along our coasts. Still I was shocked to read the latest report in The Guardian about the true magnitude of the problem and its projected growth rate.

A million plastic bottles are bought around the world every minute and the number will jump another 20% by 2021, creating an environmental crisis some campaigners predict will be as serious as climate change.
...

More than 480bn plastic drinking bottles were sold in 2016 across the world, up from about 300bn a decade ago. If placed end to end, they would extend more than halfway to the sun. By 2021 this will increase to 583.3bn, according to the most up-to-date estimates from Euromonitor International’s global packaging trends report.

Most plastic bottles used for soft drinks and water are made from polyethylene terephthalate (Pet), which is highly recyclable. But as their use soars across the globe, efforts to collect and recycle the bottles to keep them from polluting the oceans, are failing to keep up.

Fewer than half of the bottles bought in 2016 were collected for recycling and just 7% of those collected were turned into new bottles. Instead most plastic bottles produced end up in landfill or in the ocean.
...

What the fish eat, we eat.

Scientists at Ghent University in Belgium recently calculated people who eat seafood ingest up to 11,000 tiny pieces of plastic every year. Last August, the results of a study by Plymouth University reported plastic was found in a third of UK-caught fish, including cod, haddock, mackerel and shellfish. Last year, the European Food Safety Authority called for urgent research, citing increasing concern for human health and food safety “given the potential for microplastic pollution in edible tissues of commercial fish”.

Not surprisingly, the Big Drinks companies are responding to this crisis along similar lines to how Big Fossil approaches efforts to tax carbon - that is to say, poorly.

When I was a boy there was great fanfare over the introduction of the Dixie Cup. Made of paper it was the first disposable container. Prior to the Dixie Cup drinking glasses had to be washed. That was at a time when the milkman made regular deliveries of milk and picked up the empty bottles for washing and reuse. (They were still using horses to pull milk wagons in Calgary at that time but that's another story.) During my lifetime disposable packaging has been a booming business and responsible for massive pollution.

Someone suggested on another thread that we should be prepared to make sacrifices in our life styles. I would happily sacrifice disposable packaging. We simply don't need it. We never needed it. Industry wanted it because it enabled de-localizing production. We no longer have a dairy in every community.


I remember well the milk man, Toby. Our house, built in the late 30s, had a bay for milk delivery at the side. "Larry," our milk man would open the door, remove the empties, place the full bottles inside and be on his way.

It strikes me that the plastics problem is just further evidence of a nihilistic mentality that has come to pervade today's society. We reduce all of these looming catastrophes to our own contribution, thus rendering them so minuscule that we can dismiss change. The only feet a lemming can feel are his own.

The plastics problem can be insidious. There is a small area near here that gets its municipal water from a well which has become contaminated. Consequently, locals have to drink bottled water. The municipality has tried several times to clean it up but can't. The alternative, of course, is to extend the municipal pipes a few kilometers so that no one would have to use the contaminated well. Bottled water enables the municipality to avoid the costs involved in a permanent solution or the responsibility for people getting sick thus the problem can be dragged out indefinitely.

Multiply this problem by all the boil water advisories across the country and there is a massive pile of single use plastic water bottles.