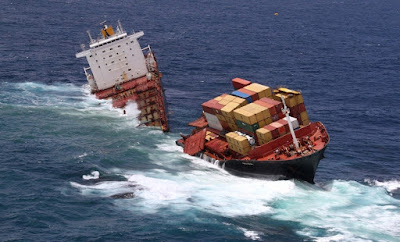 If an enemy of the United States wanted to throw the West into chaos it could not have chosen a better man for president than Donald Trump, a leader whose deepest thoughts are composed of 140 characters or less.

The U.S. likes to imagine that it remains the uncontested leader of the free world. The nations of the free world, however, have discovered there's no one manning Washington's wheel house and with the shoals nearing that's creating a certain amount of worry.

On trade, climate, foreign aid, and more, America’s allies wonder what U.S. policy is — and who, if anyone, can take America’s place.

Secretary of State Rex Tillerson testified last week before Congress, seeking to defend the wisdom of slashing his own budget by more than one-third while sketching his vision of American diplomacy in the years ahead.

But unlike in years past, U.S. allies aren’t poring over Tillerson’s testimony for meaningful signals of what U.S. policy is or will be; diplomats from around the world are learning that what Tillerson says is not necessarily a reliable guide to U.S. policy. The problem is that nothing much else is, either.

“Even if we do get meetings” with the Department of State, a European source told Foreign Policy, “most of the time what happens is that they speak in personal capacity — they don’t have capacity to speak for the administration.”

The same is true for the National Security Council at the White House, “including on very sensitive issues.” People say, “I cannot speak for the president, because I’m not sure what his position on this is.”

That lack of clarity isn’t limited to nitty-gritty points of policy. More than five months into the Trump administration, many allies and even rivals are still trying to figure out how the United States now sees its role in the world. Trump came into office blaring an “America First” message, and despite repeated soothing noises from some administration officials, has, especially in non-military matters, redoubled his rhetoric ever since.

More than five months into the Trump administration, many allies and even rivals are still trying to figure out how the United States now sees its role in the world. Trump came into office blaring an “America First” message, and despite repeated soothing noises from some administration officials, has, especially in non-military matters, redoubled his rhetoric ever since.

Or, as Canadian Foreign Minister Chrystia Freeland put it in a speech earlier this month, the United States “has come to question the very worth of its mantle of global leadership.”

After a tumultuous first meeting between NATO and Trump, German Chancellor Angela Merkel reiterated late last month that Germany could no longer fully rely on others.

Washington’s reluctance to keep carrying Freeland’s “mantle” of global leadership creates a quandary for everyone, because nobody else is willing or able to take its place. And history shows that the global system, like nature, abhors a vacuum.

China has been hankering for a place in the sun all century — but, like Augustine, doesn’t want it quite yet, and Beijing’s values aren’t the same as those long preached by Washington or Brussels.

Japan under Prime Minister Shinzo Abe is happy to shoulder a bigger role in regional defense and security — but that could put the government on a collision course with China, and even with the people of Japan, who are still, broadly speaking, pacifistic. And as seen in the scramble after the U.S. withdrawal from TPP, Tokyo is hard-pressed to drive Asian economic integration on its own.

Europe has been roused from its groggy decades — more because of the threat from a resurgent Russia than from Trump’s admonitions to spend more on defense — but hasn’t sought to play more than second fiddle for almost a century. (“We don’t see ourselves acting as new superpower or pretending to be one,” said the European diplomat.)

The chaos of Trump's incoherent administration extends beyond trade and diplomacy. It's the sort of thing that's been known to spark wars. Take, for example, Washington's ramshackle policy in the Middle East.

The present political dynamics in the Middle East are unsettled and kaleidoscopic. But in the interests of brevity, ...the basic configurations of power in the region since the 2011 Arab Spring can be simplified in terms of five loose groupings.

Second, a grouping of Turkey; Qatar; and Muslim Brotherhood affiliates such as Hamas in Gaza, Egypt under President Morsi before 2013, and the internationally-recognized Libyan government based in the western part of that country.

Third, a grouping of Iran and its Shiite allies, including Iraq (at least among key factions of the Baghdad government), the Assad regime in Syria, and Hezbollah in Lebanon.

Fourth, the collection of various Sunni jihadi networks, including the Islamic State, various al Qaeda affiliates, and any number of smaller factions.

Fifth, there is Israel, which does not fit into any of the above, but is most closely aligned with members of the first grouping.

Syria, which had all the makings of a perfectly suitable proxy war, has now drawn direct and at times hostile intervention from major powers, America and Russia, regional players such as Turkey, Israel and Iran, plus the Gulf States and the NATO and friends chorus line. The "my enemy's enemy" rule does not apply here.

Now Fareed Zakaria predicts the U.S. is about to embark on another decade of permawar.

Just saw the "selfie" of France's Macron and California Arnold on the internet with their "Make the planet great again!" Hilarious to see other politicians taking a shot at Dolt 45!

Thanks for the heads up, Lulymay. I checked it out on YouTube.

.. love the metaphor.. and the photo ! The 'skipper' of course choppered off for another golf weekend and never looked at a nautical chart anyway.. Hell, # 45 drunken Trumpen will go to his grave lying and faking it all the way. His understanding.. or should I say his misunderstanding of 'the world' is an outrageous failure of Geopraphy 101 & never mind mixing Culture or Society or Regional Factionalism in there.. its always been about HIS WEALTH.. (aka debt load)

I still maintain, a consortium of Grade Sixers, chosen at random from 36 States could be up to speed in two weeks and 'manage' the United States, clean the swamp, including all the Trump parasites, face up to internal racial issues, police violence, drug addication, food stamps and look after disabled Vets. In Week Three those kids could move on to other matters as well.. and get the Great American War Machine shrinking back to a 'defense force'

The American bureaucracy is really just a complex robotic exoskeleton.. and the 'winning' political party simply crawls inside and then explores how to walk, stumble or bumble.. or flex it muscles. Kind of a Star Wars scene so to speak.. & The Empire Strikes Back.. So there's Donald trying out the Oval Office, getting beaucoup salutes while boarding Marine One to the golf course or dinner or lunch & scratching his faky agent orange hair about whether Melania & Barron should be replaced. His other two male children are simply conniving scumbags just like him & wishing he would just die die die.. And he has this other problemo, a freako son in law to his doable doe eyed daughter Ivanka, the creep named Kushner to cuff around & manchild Steve Bannon a fatty wanna be Rasputin skulking about the White Houtse & reading all the Super Classified dirt on the citizenry of the entire world.

# 45 reminds me of our very own dear Steven Harper.. who had his cheatin heart & fat ass on the throne here for 10 dreadful years. Complete and utter fakes.. scumbags full of themselves, smartest guys in the room blah blah woof woof.. neither could operate an automobile, tractor, chain saw, lawn mower or toaster.. hell, finding Lobby on an elevator strained their feeble intuition & resources, so they had 'aides' to hit the button for them.. Its a wonder they could find their zipper., or their weenie & need someone to stuff them in a closet when the kitchen gets too hot.. 'hide in here, Sir, we'll come & get you when its over' .. dontcha know.

Bannon--did you see him last night, on The Passionate Eye?
Well...that told it all. He is "apocalyptic".